By sharing knowledge and collaborating with others in animal welfare, we are improving standards of care worldwide.

Battersea is here for every dog and cat, not just those we see in our centres. Our respected, authoritative and influential voice has a proven record in bringing about policy and legislative change to benefit animal welfare, and 2018 was no exception. We had a wide range of successes, including influencing the Government to move forward on our campaign to increase maximum sentences for animal cruelty to five years. We also persuaded the Scottish Government to consult on the issue, with a view to passing legislation later in 2019.

Our efforts to help dogs and cats outside our centres continues to be a priority through the vital work we are doing alongside other rescues to help animals that have come from puppy farms or bad breeders. In 2018 our Animal Partnerships team worked with 32 other organisations, receiving 401 dogs and 272 cats. Rescues we work with included Crowfoot Kennels, Feline Friends, Treetops, Feline Cat Care.

While Battersea can provide expert care to the animals that come to us, many rescue centres are less fortunate. We began to provide training and financial support to other organisations through the Battersea Academy and our new grant giving programme.

We believe that through working together we can help more dogs and cats in need.

With the launch of the Battersea Academy, we are using our 158 years of knowledge and experience to maximise the number of animals across the world that benefit from the Battersea way of doing things.

Cats and dogs everywhere are facing a similar host of problems, from straying and disease to the consequences of being bred for profit. However, these problems are felt at vastly different magnitudes depending on the region. In India, for instance, there are around 30 million dogs living on the streets. It would be impossible for all these dogs to be taken in, and the organisations currently helping to alleviate the problem are often stretched to breaking point.

Delivered at our London site, the Academy is open to any dog and cat rehoming or rescue organisation in any location, from small volunteer-run shelters to established rescues. Several rescue and rehoming centres participated in the Battersea Academy in 2018, with delegates from Croatia, Australia and across the UK, and we plan to share our expertise with 40 organisations in the next two years.

Alongside the Academy, Battersea’s grant-making programme is a new initiative that aims to support and build ongoing relationships with small animal rescues and shelters with grants of between £3,000 and £15,000. In 2018, 24 grants were awarded to 19 organisations, impacting the standards of practice and sustainability of rescue organisations across the world and, ultimately, helping them to help many more dogs and cats.

One of our key strategic aims over the life of the 2019-2023 strategic plan is to help 150,000 animals through the Battersea Academy. As a result of the learnings made on the programme, the rescue has since made changes to its cleaning regime, introduced a traffic light system for tracking of cat welfare, and started to use a waiting list for cat intake rather than accepting every cat immediately. These changes have allowed staff to spend more time with each of the cats in their care.

Having attended the programme, Romney House was also able to apply for an Academy Change Programme Grant, which it used to refurbish one of its cat houses.

As a result of attending the programme and receiving the grant, Romney House has now been made an official Animal Partner, working with Battersea to provide the best outcome for cats in need of homes.

The Australian Animal Protection Society also attended one of our first programmes in June 2018, to coincide with the building of their new centre. As a result of their learning, the AAPS made the decision to reduce the new centre’s occupancy rate from 300 to 100 animals, to speed up the rehoming time for both dogs and cats. Construction of various new facilities is still underway, but in the meantime the AAPS have introduced a new tracking system in their cattery, reducing their rehoming time from 36 days to 16.

The Academy has also hosted sessions for delegates from India, with representatives from Friendicoes, Let’s Live Together, Dharmasala Animal Rescue, and Friends of Animals Kottayam all benefitting from Battersea’s knowledge and expertise.

Our Academy team will be keeping in touch with all the delegates to find out how they’re implementing their new knowledge back at home.

According to Government statistics, eight million households in the UK rent their homes, equalling 38% of all households and this figure is predicted to rise to 40% by 2025. In London, the figure is even higher at an expected 60% by 2025. Unfortunately, ‘Generation Rent’ does not bring with it good news for pets and their owners.

Residents in social housing are particularly vulnerable to the barriers surrounding pet ownership. Although ‘no pets’ policies are common in private rentals, Battersea’s 2018 research has revealed that 21% of London Councils and 64% of the capital’s largest Housing Associations ban owning dogs in flats with no direct garden or street access. 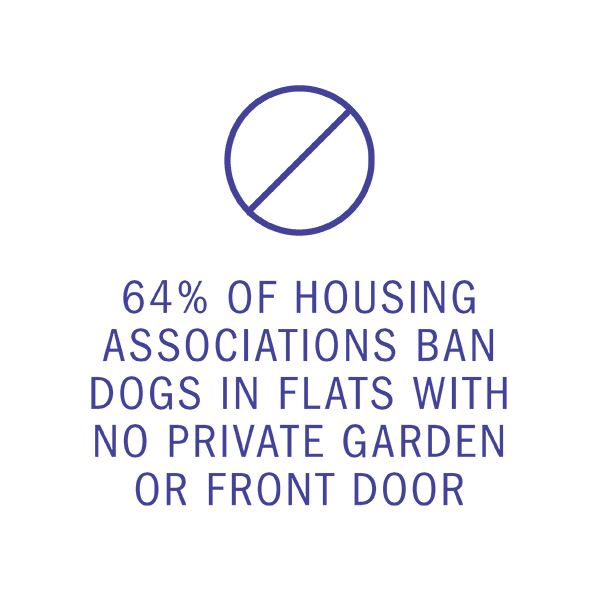 In November 2018, Battersea launched a new ‘Pet Friendly Properties’ campaign to help reduce the number of social housing tenants in London who are forced to give up a beloved pet or are denied the opportunity to have a dog or cat in the first place because of their housing situation.

Battersea offers Councils and Housing Associations advice on how they can review and improve their own policies around pets. We also offer training and advise tenants looking to own a pet in social housing. *name has been changed at case study’s request

One tenant who was affected by Local Authority rules surrounding pet ownership is Chloe*, who was forced to bring her five-year-old Bichon Frise, named Barge, into Battersea after her London Housing Association flat came under new management.

Chloe, who had owned Barge since he was a puppy, was suddenly told she’d have to give him up, as tenants were no longer allowed to keep a dog in their flats if they didn’t have a garden. The decision came as a surprise; Chloe had never had any complaints about Barge and he was well-liked by all her neighbours.

Luckily, Barge was happily rehomed and is now enjoying life with his new family. However, his story is just one of countless examples that illustrate why we are campaigning to make pets welcome in social housing accommodation.

If tenants were given more flexibility around pet ownership, it would end the worry and heartache of not knowing if they’ll be able to keep their pet – not to mention saving countless pets ending up homeless in animal shelters.

BRINGING ABOUT POSITIVE CHANGE IN THE UK

Battersea’s work throughout 2018 also focused on our continued aim to improve life for animals across the UK. In April 2018, the Government passed new regulations surrounding the breeding and sale of dogs, making it illegal to sell a puppy or kitten under eight weeks of age. This was in line with our End Backstreet Breeding campaign. Battersea also influenced the Government’s decision to ban the use of electronic shock collars on dogs, and to put an end to third parties - such as pet shops - selling young dogs and cats to the public.

In 2018 we led the animal welfare sector in tackling cat welfare issues at a Parliamentary level, by setting up the first ever All-Party Group on Cats (APGOCATS) with Cats Protection, initially to look at how cats can help combat loneliness.

Battersea’s ability to influence animal welfare policy is strengthened by our Chief Executive, Claire Horton, who is a strategic link between Government and the animal welfare sector. She champions the sector as Non-Executive Director on the Government’s Animal Health and Welfare Board for England (AHWBE), represents AHWBE on the Canine and Feline Sector Group (CFSG), holds the Chairmanship of the Association of Dogs and Cats Homes (ADCH), and sits as a special advisor to the All-Party Group on Animal Welfare (APGAW) in Westminster. 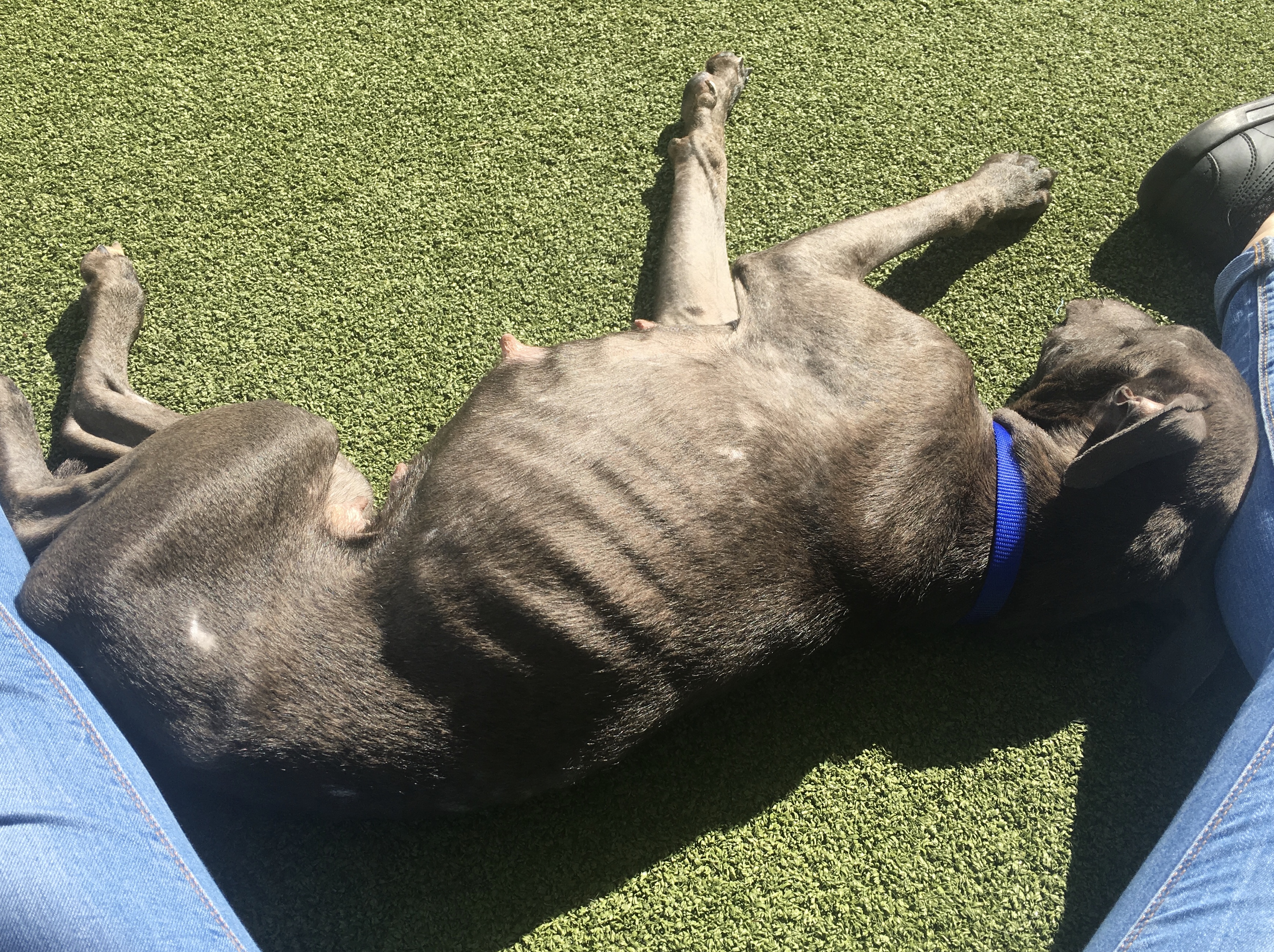 Phoebe arrived at Battersea’s London centre as a stray after being found wandering the streets of North London with no owner in sight. The small Staffordshire Bull Terrier was emaciated but had very full mammary glands, showing that she had recently given birth to a litter of puppies. Her coat was in poor condition with patches of hair loss, she smelt badly, and, upon further testing, our veterinary team discovered she was anaemic due to being so severely underweight. She also did not have a microchip. It’s likely that Phoebe was used for breeding so that her puppies could be sold for profit, then abandoned while she should still have been nursing her young. This is a huge ordeal for any dog to suffer, especially one who was estimated to be only just over one year old.

Following our campaigning for a clampdown on unscrupulous and unregulated backstreet breeders, we were thrilled to see the passing of new regulations in April 2018 that will now protect dogs like Phoebe from being used as breeding machines with no regard for their welfare. Among the measures now enshrined in law are a requirement for anyone breeding more than two litters of puppies to have a licence, and for all online puppy adverts to show the sellers licence details. Importantly it is now illegal to sell any puppy under eight weeks of age to anyone. These changes came about thanks to our End Backstreet Breeding campaign and we are optimistic this will now help clamp down on the cruel practice of forcing dogs to live in horrible conditions while giving birth to litter after litter.

Luckily for Phoebe, while at Battersea she received the expert veterinary care she so desperately needed and soon began to regain weight. Despite her tragic story, Phoebe recovered well thanks to the dedicated care she received from Battersea staff and her foster carers, and was soon rehomed to a new, loving family to begin her next chapter in life.

It is now illegal to sell any puppy under eight weeks old to anyone. 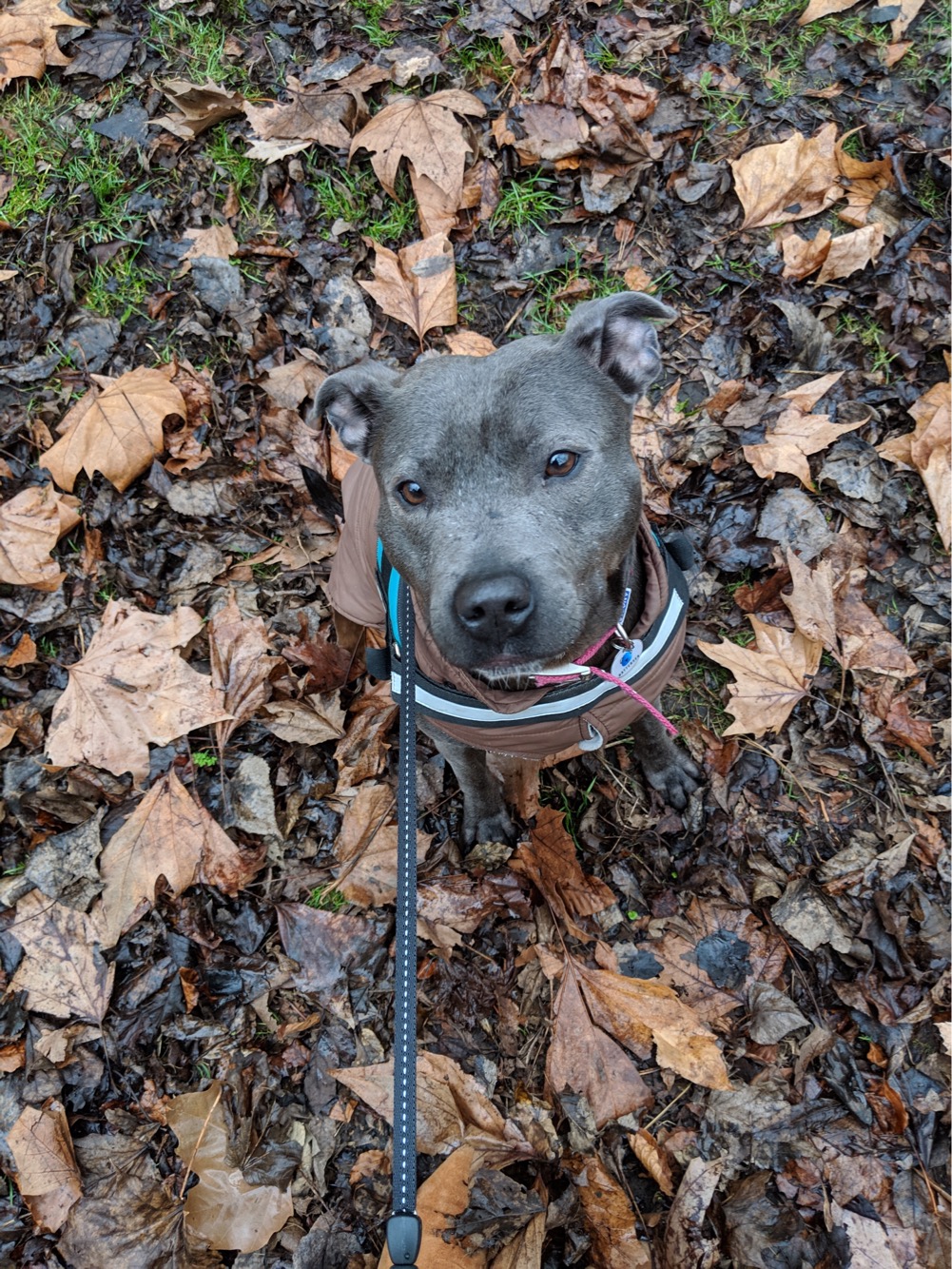 Battersea is responding to the rise in online pet sales by promoting the benefits of rehoming a rescue animal.