Battersea is responding to the rise in online pet sales by promoting the benefits of rehoming a rescue animal.

At Battersea, we believe that rehoming a rescue dog or cat really does provide the very best possible outcome, for both the animal and their new owner. However, 2018 sadly saw the number of pets sold online increasing. This can often result in people ending up with an animal they are unable to care for medically or behaviourally, which they then bring to a rescue centre like Battersea.

In response to this ongoing challenge, Battersea implemented various new ways to try and combat the rise of pets being sold online. By advertising on websites such as Gumtree, we aimed to promote the benefits of rescue animals across the country and disrupt the problem at its source. Our digital team also used targeted advertising to direct our online ads at people directly searching for dogs and cats online. 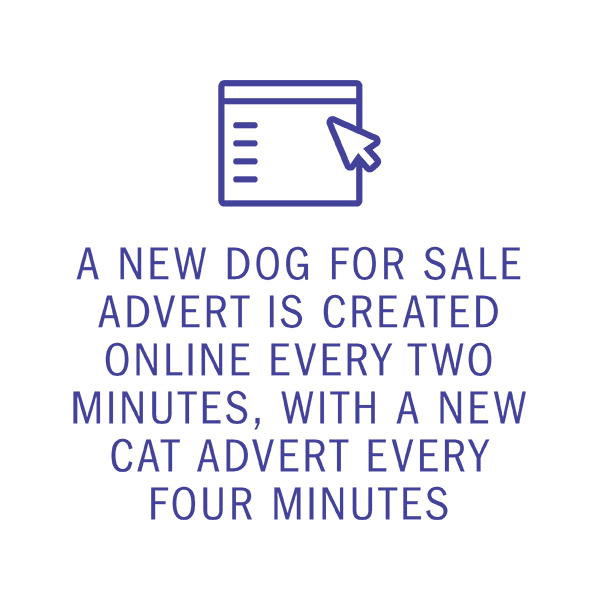 Alongside this, we invested in developing our online rehoming processes to make applying to rehome an animal as straightforward as possible.

We also focused on developing the skills of our customer service staff. By the end of 2018, we were able to ensure that our phone operators were answering 90% of calls as they came in.

Battersea refreshed its brand in 2018. Unveiled in April, the new brand accompanied an ambitious integrated marketing campaign, including Battersea’s first brand TV advert and content across our digital platforms. Popular video series such as Through the Catflap, Made in Battersea, and What They Did Next helped us grow our social media following by 50%, reaching new audiences of potential rehomers.

We want to ensure people think of Battersea first when considering acquiring a dog or cat. To support this, we launched a new digital advertising strategy in 2018, designed to target people looking for a new pet. This resulted in our adverts being seen more than 42 million times online. Raising awareness through marketing and innovating our online platforms also resulted in a 35% increase in online donation income and a 50% increase in visits to our online shop. Battersea reached millions of homes across the country thanks to our award-winning ITV series Paul O’Grady: For the Love of Dogs. Started in 2012, the series helps ensure Battersea is a much-loved household name. The total amount of viewers for series seven, programme repeats and the Christmas Day Special, was a staggering 73 million (up from 65 million in 2017).

As part of #ReadyToBeLoved, we took some of our rescue dogs to relax on the sofas in the windows of furniture stores on Tottenham Court Road. Many new potential rehomers were inspired to consider the idea of welcoming a dog into their home.

We also promoted the many benefits of rescue animals to the public at events such as Crufts, Discover Dogs, Game Fair, Countryfile Live, and the Royal Windsor Horse Show.

With a reputation that reaches well beyond the boundaries of South East England, many people will travel a long way to rehome a Battersea animal. But it’s not every day that a Battersea dog or cat is rehomed to somewhere quite as grand as Hunterston House. The beautiful manor in rural Ayrshire, Scotland, is used as a filming location for programmes such as Outlander and Jonathan Creek, and has had many celebrity visitors grace its halls.

Fittingly, its newest resident, Tess the Jack Russell Terrier, is not short of star quality herself. Tess was handed in to Battersea Old Windsor when her previous owner’s circumstances changed. The friendly and excitable young Terrier spent several weeks in kennels waiting for the perfect home. Little did she know that her new home would be a manor house more than 400 miles away.

Mary Ross works as a housekeeper at Hunterston House and had been searching for a dog for several months before deciding to try Battersea. After travelling to our Old Windsor centre to meet Tess, she quickly decided she was the dog for her, and it wasn’t long before the pair were making the seven-hour car journey back to Scotland. Tess is just one of many dogs and cats that are rehomed by Battersea across the UK. Last year we rehomed 1,334 dogs and 926 cats to towns and cities outside London.

Tess has settled in wonderfully to her new home and enjoys daily walks to the local forest and nearby beach. It’s thanks to our far-reaching and highly respected reputation that people such as Mary, are often willing to travel far and wide to visit Battersea when looking to rehome a rescue dog or cat.

Not all animals who arrive here are suited to a traditional family home. Due to our non-selective intake policy, we often receive dogs and cats with differing behavioural needs. This is where we look beyond traditional homes, all across the UK.

In 2018, 41 Battersea dogs were rehomed with the help of specialist Breed Rescues, representing a 50% reduction on 2017 and reflecting our renewed efforts to work with, and successfully rehome, more challenging dogs. Battersea is recognised by the Kennel Club as the only major welfare charity working effectively with its extensive Breed Rescue network. Since it was launched in 1998, the service has reunited over 30,000 lost dogs and cats with their owners.

Battersea was thrilled when HMP Six Counties Search Dogs rehomed six-year-old Staffordshire Bull Terrier Cookie as a drug detection dog. Cookie is the first of her breed to hold such an important role within the prison service.

During her 56-day stay at Battersea, staff noticed Cookie had exceptional agility skills and was extremely good at channelling her energy into games and activities.

Battersea’s Working Dogs Manager, Jeff Moore, recalls, “From her first session, Cookie showed great potential, so we were really hopeful that she’d be able to find a working home that would be well-suited to her needs.

“She’s very sociable, clever, and a very high-energy dog, so I knew that in the right setting she could channel all that into doing something great.”

Cookie is now a fully qualified drug detection dog and has already helped uncover three different hauls of illegal substances. Jeff says, “Cookie is a prime example of how dogs of any breed shouldn’t be judged on their looks or ‘reputation’ alone. Any dog who is smart and loves the mental and physical stimulation of training has the potential to be an incredible working dog.”

He adds, “I really hope that dogs like Cookie can help to pave the way for more unusual breeds to become successful working dogs.” Without our incredible staff, volunteers and supporters, Battersea would not be able to continue all the hard work we do to help dogs and cats.