Battersea's staff and volunteers work tirelessly to achieve the best possible outcome for every animal.

Battersea is not selective in the dogs and cats it takes in – we welcome every animal in need of our help, caring for them as long as it takes to rehome them. This approach means that we don’t discriminate over the types of animals we receive. In 2018, Battersea helped many dogs and cats with very complex problems requiring specialist and often extensive care and rehabilitation from our veterinary and behavioural teams.

The ever-increasing numbers of young animals and fashionable breeds traded on various websites contributed to Battersea receiving 9% fewer puppies and 13% fewer kittens in 2018. But it’s often animal rescues that pick up the pieces when owners can no longer care for the new puppies and kittens they’ve bought online, due to unforeseen veterinary or behavioural issues. In the first three months of 2018 alone, Battersea took in more than 100 dogs that had been bought online. On 1 October 2018, new laws came into force banning licensed sellers from dealing in puppies and kittens less than eight weeks old. On 23 December the Government also confirmed it will ban the sale of puppies and kittens by pet shops and other commercial dealers.

This had an immediate, dramatic impact on puppy farm dealers across the country, who are now getting rid of breeding bitches and stud dogs that will be of no use to them once the ban comes in.

Responding to this urgent problem, Battersea – along with other UK rescue centres – has been doing all we can to help these abandoned animals, offering them a new life and an opportunity to experience their first ever loving home.

Puppy farm dogs don’t know life beyond a tiny, filthy cage, they’ve never been on a lead before or even been allowed into the daylight for a walk. Battersea is providing them with specialist care, medical treatment, and essential training. And we are rewarded every day by seeing them make progress and eventually go home, where they will be loved and cared for.

Battersea’s efforts to help dogs and cats outside our three centres has increased significantly in recent years, and will continue to do so through the vital work we are doing alongside other rescue centres to help animals that have come from puppy farms or bad breeders. We’ve also been taking in and rehoming cats from Yorkshire Cat Rescue since 2016 to help them cope with the huge numbers of cats being brought to them and thanks to our efforts, we have helped the centre clear their long waiting lists. After being bought online, Nimbus arrived with us at just four weeks old and had to be taught how to eat and clean himself.

Sold online at just four weeks old, Nimbus was brought in to Battersea when his new owner realised he was far younger than had been advertised. He’d been bought on a car boot sale app and arrived at our London centre frightened and covered in his own urine. Too young to clean himself, Nimbus had suffered scalding from the urine on his skin and was also very underweight. Our veterinary team cleaned him up and he was taken on foster by Veterinary Care Assistant Kate Brooks, who was able to provide the round-the-clock care that Nimbus needed after being separated from his mother at such a young age. Kate taught him how to eat, as he had not used a bowl before, and gave him soothing baths and eye drops for his constant eye infections.

It took several weeks to get Nimbus well enough to go to a new home. Battersea is seeing a huge rise in the number of animals brought in to its centres after being sold online, and cases like this one show the perils of buying pets over the internet. Nimbus is just one example of an animal who was sold too young and in poor health. Many other animals bought online are reluctantly given up to rescue centres or sold on to someone else once their owners realise they cannot fully meet their pet’s needs.

Many dogs and cats arrive at Battersea needing little more than a check-up, vaccination, worming and flea treatment. However, others are in poor condition and it is up to our team of eight vets and 25 nurses to care for them. As the popularity of brachycephalic (flat-faced) dog breeds continues to grow, so do the number of these dogs being given to us with serious health problems.

In 2018 we took in 47 Pugs compared to 36 in 2014. We also took in 40 French Bulldogs, a huge leap from eight that came through our gates in 2014. These dogs have been bred to have short, obstructed airways and often need major surgery just to be able to breathe. In 2018, our vets performed this highly complex Brachycephalic Obstructive Airway Syndrome (BOAS) surgery more than ever before in our history. In 2015, Battersea performed a total of seven BOAS surgeries. Only three years later, our vets had to perform this operation a staggering 62 times. In 2018, Battersea made some vital improvements to operational facilities at all our centres, which would not have been possible without the generous funding and donations we receive from our valued supporters. At our Brands Hatch centre, donor contributions helped us build four new outdoor cat pens, providing improved accommodation and a stimulating environment for more independent cats used to being outdoors.

At Battersea Old Windsor, a new indoor exercise space for the centre’s dogs was completed and will be used for a range of dog-related activities including training, introducing potential new owners to a dog, and dog agility demonstrations. Four new, large cattery pens were constructed, and improvements were also made to the existing kennel blocks. At our London centre, an activity space was created within a disused railway arch, providing valuable stimulation for our dogs during wet or hot weather. Containing sand pits, puzzle games, sensory plants and agility equipment, this facility has been designed and created by staff and volunteers to provide dogs with an interesting space to explore and enjoy. 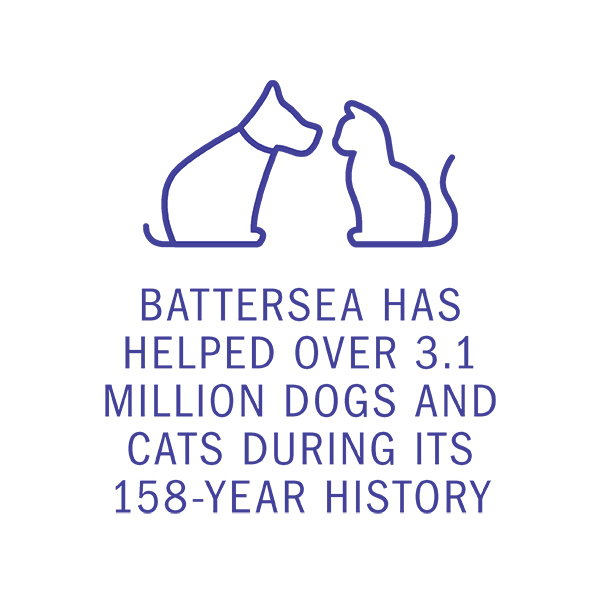 For those animals that find our kennels and cattery too overwhelming, the support and dedication of our foster carers proves invaluable. In 2018, 463 dogs and 385 cats were placed in temporary foster homes, enabling our staff to gain a valuable insight into how our animals respond to the sights, sounds, and comings and goings of a typical family home. In 2018 two of Battersea’s long-standing foster carers were shortlisted for a prestigious CEVA Animal Welfare Award. It is not uncommon for animals to arrive at Battersea with unusual stories, but it is rare for one to have travelled over 2,000 miles. This was the case for threeyear- old Domestic Short-hair Osmond, found abandoned in a cardboard box on the streets of Cairo when he was just three weeks old. Luckily, the tiny kitten was taken in by the people who found him. When they left Egypt to return to the UK, Osmond came with them.

When Osmond’s owners were sadly unable to continue looking after him due to a change in their circumstances, they brought him to our Brands Hatch centre. Staff and volunteers quickly grew to love his curious and vocal personality, and lucky Osmond became one of the first residents of the new garden pens, built in 2018 specifically to give independent cats somewhere to safely explore the outside world. Each of the three pens has steps to allow the cats to climb up high and look out over the surrounding fields, as well as a heated shed with cat-flaps to ensure they stay warm during winter. The pens also include solar-powered water fountains, non-toxic plants, outdoor litter areas and benches for human companions to sit on.

Adventurous Osmond enjoyed these new facilities immensely. He loved having visitors who would indulge his playful nature with a toy and would often cuddle up next to them. After 70 days at Brands Hatch, he set off on one more journey – to a new home in Hampshire. By sharing knowledge and collaborating with others in animal welfare, we are improving standards of care worldwide