Earlier this year, in a far simpler time, an unlucky rescue cat named Monique hit headlines worldwide after no-one attended her birthday party. After spending 130 days at Battersea and her sad tale tugging at heartstrings across the world, we were all delighted when the unlucky tabby finally found her perfect home.

After appearing in newspapers and on TV in the UK and beyond, the two-year-old stray quickly built up a huge fanbase including people kindly offering to fly her to their homes halfway round the world, generous members of the public donating to Battersea in Monique’s honour, and cat lovers across the country sending gifts to our London centre.

Watching the news one evening, a gentleman named Adnan saw a segment on Monique and called Battersea first thing the next morning. By coincidence, he was put through to Sophie, the member of staff who had appeared on the news alongside Monique, and it quickly became clear that the tabby’s perfect match had finally been found.

On 14 March, Adnan took Monique home with him to South London. As a shy cat, Monique took her time to find her feet in her new surroundings and had just begun settling into her new life when the nation went into lockdown. Luckily the pair have proven great company for one another over the last six months.

Talking of their time spent together so far, Adnan said: “It's been just Monique and I alone since March. She’s very talkative and greets me every morning and can be very bossy when she wants treats. She follows me around the house, pawing at me for scratches and giving me headbutts for cuddles. She was initially keen to jump in my lap (which was interesting when I was working), but has now decided that her many napping spots are much more comfortable and will instead summon me for head scratches.”

Lindsey Quinlan, Battersea’s Head of Catteries and Feline Welfare, said: “Over the years we’ve regularly seen our cats appear in the media or gain fans online, but we’d never before seen anything quite like Monique’s overnight fame. We were so touched that people from all over the world wanted to help her find a home. It just goes to show how many people understand that rescue cats are special and deserve a second chance at love.”

At Battersea we have been here for every dog and cat for 160 years and we are now able to safely take in dogs and cats just like Monique who need new homes once again. Like many charities, Battersea has seen a significant drop in income as a direct impact of the coronavirus pandemic. Now more than ever, Battersea needs your support so we can continue to help animals like Monique.

Happy Days for Bertie the Pug

A portion of the royalties of a new book celebrating a paralysed Pug will be donated to Battersea. Happy Dog Days at the Pug Café by Anushka Fernando and Bertie the Pug, due to be published on October 29th 2020, tells the true story of Bertie the pug, who was diagnosed with hemivertebrae and was unable to walk. His owner decided to open a dog-friendly café where he could meet other dogs. The Pug Café in Guildford quickly became popular, but when the café faced closure, Bertie and his friends came to the rescue. Fernando commented: "Bertie is a very special little dog who has changed the course of my entire life. Bringing me happiness, friendship and endless puggy adventures! We are both incredibly excited to be given this opportunity to put paw to paper and tell the story.” We can’t wait to get our hands (and paws) on a copy! 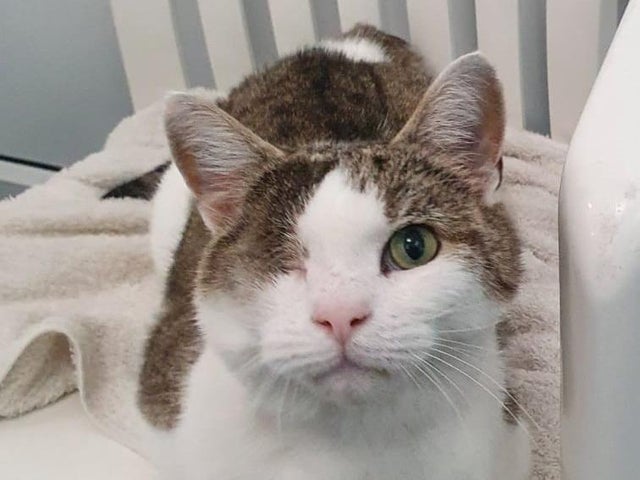 Kate, 38, and her family, adopted 11-year-old ‘gorgeous’ George as she learned to live with her diagnosis of Usher syndrome, a degenerative condition that causes hearing and vision loss. George was rescued by his previous owners as a young stray, then taken to Cats Protection’s Gildersome following their sad death. His eye was removed after a routine vet visit found he had cancer in it.

Kate said: “I saw George on the Cats Protection website and, having begun to lose part of my sight in the past few years, I immediately fell in love with this gorgeous chap.”

Kate could not visit George due to lockdown restrictions, but was able to get to know him and his personality through videos supplied by staff at the centre. He was then delivered to the family’s door and Kate says he settled in straight away, following them around and giving cuddles!

She said: “Having only one eye certainly hasn’t held him back. He loves joining us for story time with my five-year-old daughter, and, while he prefers to stay close to home, he’s been out walking along fences and climbing trees.” A happy ending for some kindred spirits.

Find out more about the George’s adventures on the Spenborough Guardian website. In these uncertain times, we’re sharing a weekly round-up of positive things happening at Battersea, as well as heartwarming dog and cat stories from the UK and beyond.