As we continue to look to brighter times ahead, it’s the time of the week where we share our round-up of positive things happening at Battersea, as well as heartwarming dog and cat stories from the UK and beyond. 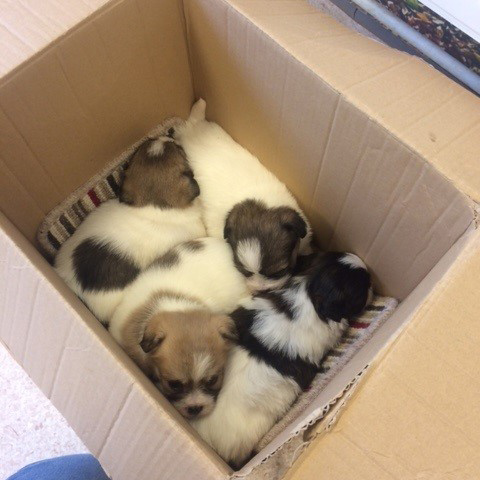 Four puppies abandoned in woodlands in Kent have found new homes, thanks to staff at our Battersea Brands Hatch centre. Digby, Pip, Luna and Eevie were brought to us in January after being discovered by a member of the public while out on a walk.

At just four weeks old, the puppies were far too young to be away from their mother and had nothing but a cardboard box to protect them from the bitter winter elements. Had they not been found it is highly unlikely that the litter would have survived such challenging conditions.

As well as being taken from their mother at such a vulnerable age, it was also found that all four puppies had a medical condition which, although treatable, would have made the puppies harder to sell on initially, due to the fact they would need surgery when they’re older.

Anna Hemmings, Centre Manager at Battersea Brands Hatch said: “Due to the fact that Digby, Pip, Luna and Eevie all had hernias when they were found, we think it’s likely that their breeder heartlessly threw them away as they would have been harder to sell on to new homes. “Thankfully, Battersea is providing the puppies with all of the veterinary needs they require, but had these puppies been left any longer in such cold and dire conditions it’s certain that they wouldn’t have survived, especially being so young.

“We’d urge anyone who needs to give up their pet to bring them to a rescue centre like Battersea instead of abandoning them; this way you can ensure that your pet is safe and has the best chance of finding a second loving home. We’d never judge anyone for needing our help and are here for every dog or cat regardless of age, breed, behaviour or medical concerns.

After a tough start in life, we’re really pleased that Digby, Pip, Luna and Eevie have now been rehomed and are now beginning their journey into becoming well-rounded and much-loved family pets.

Kate Ham, who has adopted one of the puppies said: “Despite having a bit of a rough start in life, Pip is growing up to be a very confident young dog with plenty of energy to burn. It’s sad to think that had she not been brought into Battersea, her future could have looked very different to what it is now- we just couldn’t imagine our lives without her!” 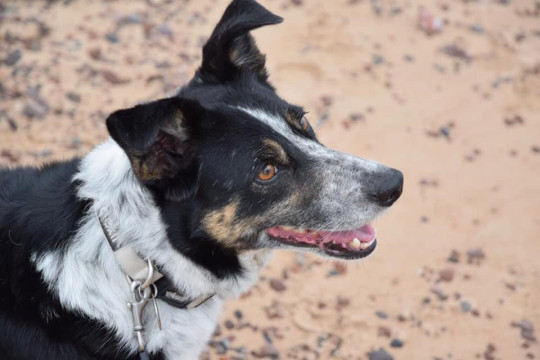 A sheepdog who was given up by her previous owners after losing her hearing is back at work after learning how to read hand signals. Eight-year-old collie Peggy was given into an RSPCA centre in Norfolk in 2018 as she could no longer follow voice commands. But after fostering Peggy as a stopgap, Chloe Shorten, animal welfare manager at the centre, and her husband Jason, who’s a shepherd, fell completely in love and decided she was going nowhere.

The couple trained Peggy in how to follow their hand signals, with Chloe describing her as living proof that you can ‘teach an old dog new tricks’. Peggy fitted in perfectly alongside the couple’s two other working sheepdogs Sid and Nora and goes everywhere with them.

‘We knew Peggy wanted to be working so we started the long process of teaching her how to herd and work with a shepherd without relying on voice commands.’ said Chloe. “We started by teaching her to look at us for hand signals. We used repetitive and positive reinforcement and instead of pairing a verbal command with an action we’d use a physical hand gesture.’ ‘She reads our hand signals and body language as a way of understanding what we’re asking for. For example, thumbs up means “good girl”.’ The couple had advice and guidance from a specialist sheepdog trainer and Peggy practised alongside Sid and Nora out in the fields. Despite being generally retired, Peggy goes out to work with Jason from time to time and the couple say she absolutely loves it and that she’s still learning new things and improving all the time.

‘The main thing for us was being able to tell her that she’s a good girl and reassure her she is going to be OK. ‘It took her a while to learn that we loved her and to gain her trust but it’s been so rewarding knowing that she now understands our praise. Chloe said. ‘Now she’s learned to demand fuss by tapping and nudging you on the arm or leg.”

‘She absolutely loves running around so we have a GPS tracker on her collar just in case we get separated and she couldn’t see us, as she can’t hear us calling her. ‘But it’s amazing to see her with this new lease of life and enjoying her life with us. ‘She’s proof that you can teach an old dog new tricks, and is a wonderful example of the capability of a dog, even if they do lose a sense.’ 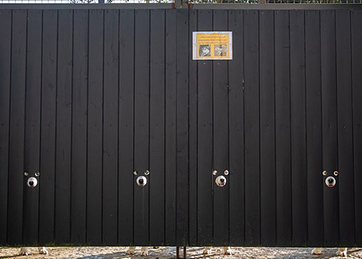 A pack of Siberian huskies have become quite an attraction in their hometown of St Neots in Cambridgeshire, after their owner Andy Grannell cut special spy holes in his gate to allow them to peer through at passers-by.

Andy's huskies gained particular attention recently when Jenny Polhill, 26, spotted all four dogs peering through their holes as she walked her own dogs past the gate and snapped a picture.

Jenny shared the picture to a St Neots Facebook page, where it’s racked up more than 1,000 likes, with locals commenting that they had been waiting years to spot all the dogs peeking through at once.

Mr Grannell said he created the holes shortly after moving into the house in 2014 after noticing the dogs would poke their noses under the bottom of the gate to try and keep an eye on the goings-on outside. He decided it would be best to save their necks and gave them some vantage points at their normal heights, meaning they’re now able to fully enjoy all the love and attention they get whenever they poke their noses through. A Bill to increase the maximum sentence for animal cruelty in England and Wales took another step closer to becoming law today when it passed its last stages in the House of Commons. As we look to brighter times ahead, it’s the time of the week where we share our round-up of positive animal stories.