These are turbulent times, so we’re sharing some of the positive things happening at Battersea with all our dogs and cats in the hope it adds a bit of cheer to your day. We know that animals can be a source of great comfort during hard times, and here at Battersea our foster carers know this more than most.

Here’s our weekly rundown of happy stories and fun things from some of our amazing foster carers and their animals.

The future is looking bright for Jessie, a stray young Bichon who came to Battersea in a very sorry state back in January. Found with a male of the same age and a four-month old puppy which staff assume was theirs, their coats were long and matted and they were not in a good way. They were in such poor condition in fact that it wasn’t until the dogs had been allowed to settle and staff were able to groom them that it became clear that Jessie was quite heavily pregnant again.

Jessie was quickly placed in a foster home to rest and get her strength up. A few weeks of home comforts later, along came six beautiful, healthy puppies. Jessie’s foster carer Jacqui hadn’t dealt with a home birth before, so it was a big event for all, but Jacqui tells us that Jessie coped amazingly well and was a truly brilliant Mum throughout. Jacqui said “On the day of the birth, Jessie had everything in hand. I was watching all these new little creatures come into the world and Jessie knew exactly what to do and took it all in her stride.”

The adorable little bundles of fluff grew up fast, and as they got older and found their feet they also discovered their cheeky sides. Six playful puppies would be a handful for anyone, but Jacqui and her family insist that the opportunity to “see each of the pups into this world and get to know each dog with its own personality was an amazing experience to be a part of."

Then came lockdown. The new restrictions meant that the puppies weren’t able to go to their new homes at 7 weeks. Instead, the puppies were safely moved into temporary foster homes to allow them to continue their development and socialise with new people and animals.

Cared for at home by four members of staff from our Battersea Old Windsor centre, by the time the puppies had been able to receive their vaccinations, government-issued guidance meant that they could all safely go to their loving new homes. Jemima, the only little girl of the litter, had to wait a little longer but finally went to her new home last weekend. Coming from a litter of all boys little Jemima had learnt some very cheeky habits and kept Senior Vet Nurse, Lisa-Marie Porter and her own four dogs very much on their toes! Lisa-Marie said "Being able to care for Jemima and her brother Jared was a pleasure. They were hard work as you would expect puppies to be but equally loving and affectionate and they particularly loved having the older dogs as role models and snuggle buddies.”

In the meantime, Mum Jessie stayed with foster carer Jacqui, where she continued to flourish, and turned into a confident, playful dog. She finally went off to her lovely new home a few weeks ago and her new owners tell us she settled in pretty much immediately and is very much loved already. Jacqui and her family say they will miss Jessie and her "squiggly" pups but wish them all the very best and they are ready and raring for their next fostering challenge. So that’s where all the toilet roll went!

Foster carer Deborah kindly sent in these brilliant pictures of foster dog William. Described by Deborah as a “very prolific toilet roll thief and general goofball” William is clearly having the time of his life keeping an eye on stock levels and making sure to get plenty of rest between watches! 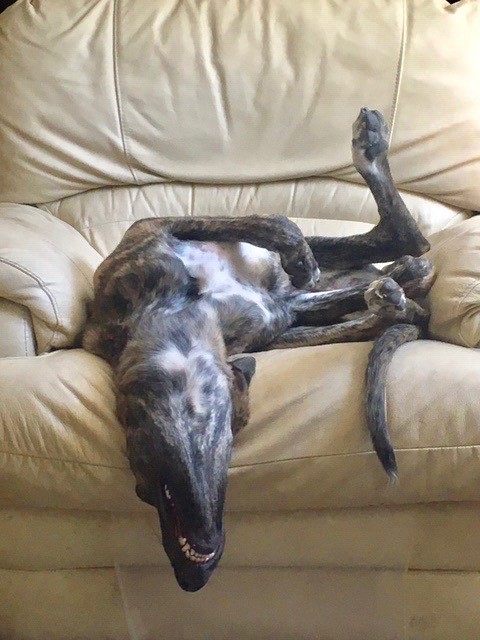 What’s all this about a downward dog?

Like a lot of people, foster carer Cathy has been using her time in lockdown to practice her yoga. Well, this week foster cat Pippa decided it was time to see what all the fuss was about. We’re not sure if she wanted to show off her own cat pose or just bring the session to a close for dinner time, but either way she is definitely making her calming presence felt. 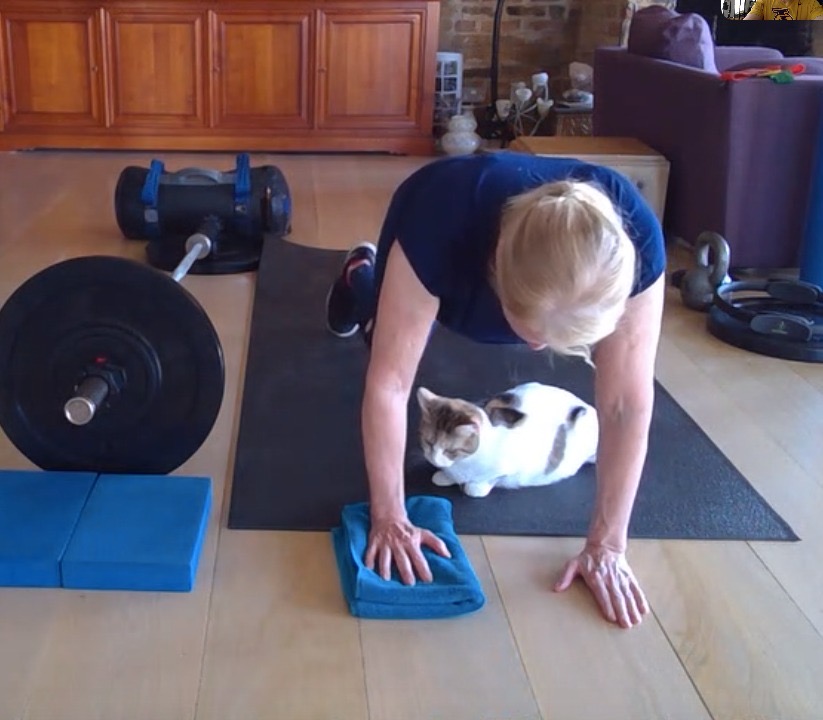 Rescues to the Rescue!

This week we were delighted to be able to share our brand new advert featuring all of you! More than 1,000 people submitted video clips and pictures of their rescue dogs and cats brightening up their lockdown lives for use in our new Rescues to the Rescue advert.

Whether it's been providing temporary relief from the news cycle, making an unscheduled cameo in their 10th video conference call of the day, or just being there for cuddles on the sofa when it all gets a bit too much, 75% of Brits say their rescue pet is helping them cope during the nationwide quarantine.

The advert is a celebration of the laughter, joy and comfort rescue pets are bringing their owners during this time, and is a big thank you to those who’ve been able to support Battersea in continuing to care for dogs and cats still looking for their second chance.

Find out how you can support Battersea, or join the growing community of rescue lovers by using #RescueIsMyFavouriteBreed. 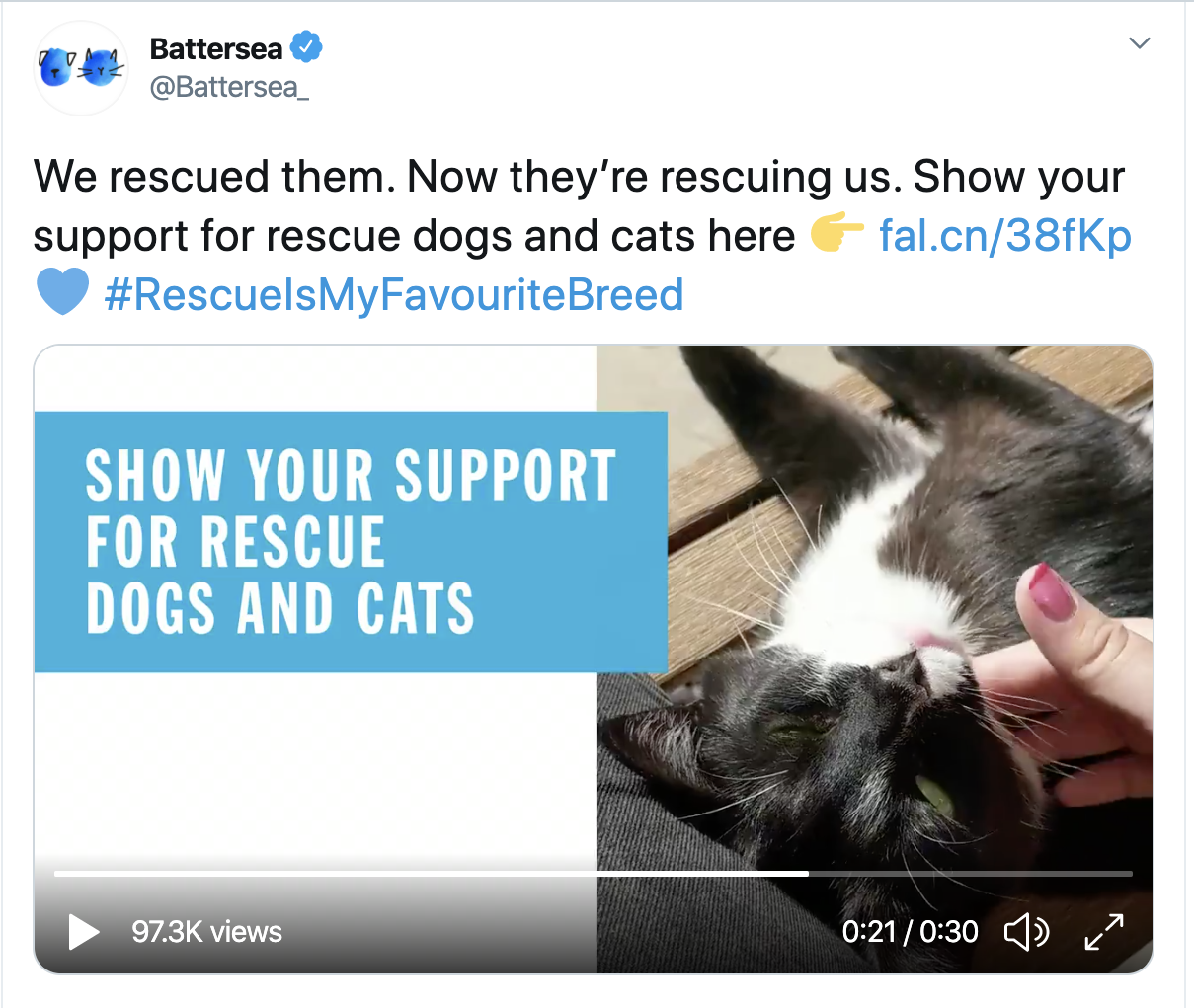 Catch up with… Jo Sheldon

This week, we caught up (remotely) with Jo Sheldon from the Marketing Campaigns team at our London Centre. Our weekly training challenge for you and your dog.