In these uncertain times, we’re sharing a weekly round-up of positive things happening at Battersea, as well as heartwarming dog and cat stories from the UK and beyond.

We know that animals can be a great source of comfort, so we hope it adds a bit of cheer to your day.

Taking to the skies for dogs and cats! 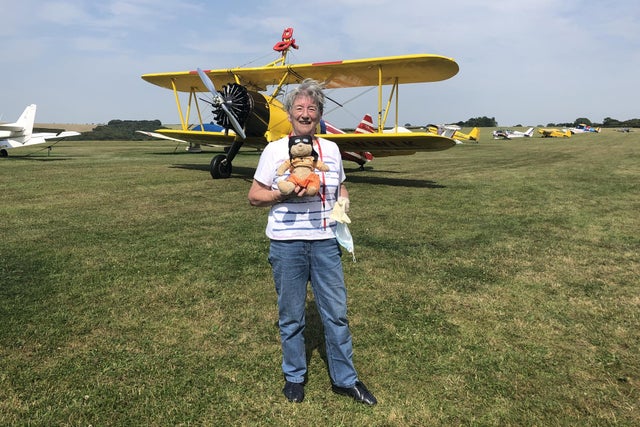 Thrill-seeker and retired guesthouse owner Anne English took to the skies as a special 81st birthday surprise and achieved a lifelong dream by wing walking for charities including Battersea. She described her 15-minute flight as ‘one of the best days of my life’.

Anne said: ‘It was wonderful - everything I imagined it would be and more. During the briefing they asked if I just wanted to fly around a bit or if I wanted a bit of fun. Well, I didn’t come all this way not to have the full experience so he was dipping and banking.’

As well as celebrating her birthday and fulfilling a long-held ambition, Anne chose to raise funds for two charities: us here at Battersea and a local charity Second Chance Animal Rescue.

Happy Birthday Anne, and thank you for your heroic efforts. We can’t wait to see what you do to celebrate 82!

Find out more about Anne’s adventures.

File under A for Adorable Here at Battersea lots of us who are still working from home are missing having a dog around the office while we work, but employees at design consultancy Holmes & Marchant in China have taken up the mantle by welcoming a stray cat and her adorable new litter.

The mother cat, whom staff decided to name Boba, would meow and rub against people each time they walked into the office. After noticing she was looking quite round (like the bubbles in Boba tea!), and most likely pregnant, one of the office workers decided to take her inside.

The next task was names for the four boys and four girls; five tabbies, two gingers, and one calico. Staff decided on Pudding and Milk Topping for the two ginger kittens, and the smallest one was given the name No Ice (translated from Mandarin). The young family have been given their own private meeting room and the staff are in the process of finding loving new homes for both Boba and her offspring. Here at Battersea we think all of our dogs and cats are beautiful, but this week Boss has well and truly captured our hearts with his showstopping poses. A former resident at our Battersea Brands Hatch centre, Boss couldn’t quite make up his mind when staff member Estera asked him to smile for the camera, and as you can see, opted for multiple different facial expressions all at once! Our roundup of this week's feel-good news