Battersea has worked, and will continue to work, collaboratively to ensure high standards of animal care. Against the difficult and ever-changing landscape of 2020, we worked with the Canine & Feline Sector Group (CFSG), Animal Welfare Network Wales (AWNW) and Companion Animal Welfare Group Wales (CAWGW) to provide guidance to pet owners, businesses, and professionals on what could be done legally and safely during lockdown. This included a suite of infographics, which we distributed across our social media channels to reach a large audience of owners and professionals.

Battersea also co-ran the All-Party Parliamentary Group on Cats (APGOCATS) with Cats Protection and Blue Cross, to deliver a joint report on the link between cats and tackling loneliness. The report was well received by politicians, media, and other stakeholders. We provided support to the Department for Environment, Food & Rural Affairs (Defra) for their ‘Petfished’ campaign against unscrupulous breeders selling puppies or kittens online and duping well-meaning buyers into believing the animal had a happy, healthy start in life. We contributed to several national press articles on the surge in puppies being bought during lockdown, discussing the risks of buying pets online and encouraging people to think rescue first. Interviews with our spokespeople included The Guardian, BBC Radio 5 Live, BBC Radio 4 You and Yours, and Times Radio.

Battersea continued to lead the sector membership body the Association of Dogs and Cats Homes (ADCH), of which our Chief Executive served as Chair during the year, providing essential support at a critical time for the sector. As well as leading the establishment of an emergency fund, we carried out two major surveys to understand how ADCH’s members were coping with and responding to the pandemic. We also provided support and planning for a nationwide food drive to secure and distribute free pet food to rescues across the country.

IN FOCUS - Sold Too Soon 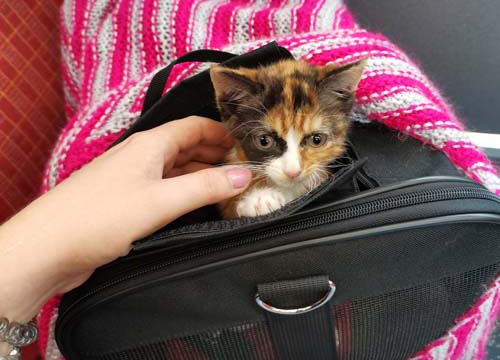 One of the biggest impacts the pandemic has had on animal welfare has been the increased sale of puppies and kittens. With so many people suddenly spending a lot more time at home, it’s only natural that lots of people started thinking about getting a new companion. However, the sale of puppies and kittens online is a trade that we see the sad consequences of all too often here at Battersea.

Last year, a sickly kitten called Alani was rushed straight to our clinic when her owners found a lump only two days after they bought her. Local vets had diagnosed her with an umbilical hernia, something that would require expensive treatment her new owners simply could not afford. On arrival, Alani was rushed to our London centre’s operating theatre where Battersea’s expert vets were able to treat the hernia. Alani was then cared for by a foster carer until she was ready to go to a new, loving home.

Shaun Opperman, Battersea’s Veterinary Director, says, “Alani was able to get the treatment she so badly needed. Her previous owners made the right decision by handing her into Battersea as they were unable to afford the veterinary procedure. They’d only had her for two days and hadn’t realised how young she was — far too young to be parted from her mother.

“Sadly, this isn’t the first time we have seen animals like Alani being brought into Battersea needing urgent medical care. Animal lovers across the country have been duped into handing over cash to unscrupulous sellers who sell pets without any thought for their welfare.”

Battersea shared Alani’s story with the media to highlight the risks of buying pets online, and our Ambassadors David Gandy, Amanda Holden and Paul O’Grady added their signatures to an open letter backing the Government’s Petfished campaign. We also shared advice on our website and social media channels for those who were thinking of buying a puppy or kitten.

Battersea has a respected, authoritative, and influential voice with a proven record in bringing about policy and legislative change to benefit animal welfare. Despite significant challenges, 2020 was no exception.

In January, we were pleased to see the Animal Welfare (Sentencing) Bill introduced by Chris Loder MP as a Private Member’s Bill, backed by the Government. This called for an increase in maximum sentences for animal cruelty, from six months to five years.

Demonstrating our ability to successfully build political relationships, we organised a Battersea reception in Parliament in partnership with Sir Oliver Heald MP. This was attended by over 100 Parliamentarians including Animal Welfare Minister Lord Goldsmith and Bill sponsor Chris Loder MP, setting us up well for the Bill successfully progressing through Parliament and gaining Royal Assent in 2021.

In Scotland, Members of Scottish Parliament (MSP) passed into law the Animals and Wildlife (Penalties, Protections and Powers) (Scotland) Act 2020 in June, which makes provision to introduce fiveyear sentences for animal cruelty in Scotland. This followed three years of proactive engagement by Battersea with MSPs and officials.

We also continued to highlight issues around pet-friendly properties and fair pet ownership for renters, in particular supporting MP Andrew Rosindell’s ‘Jasmine’s Law’ campaign, to eradicate ‘no pet’ clauses in tenancy agreements. The Bill echoed many of the calls made in our own Pet Friendly Properties campaign, and we provided a briefing from which several parts were used in Mr Rosindell’s speech in the Chamber.

IN FOCUS - Going Virtual For Our Party Conference 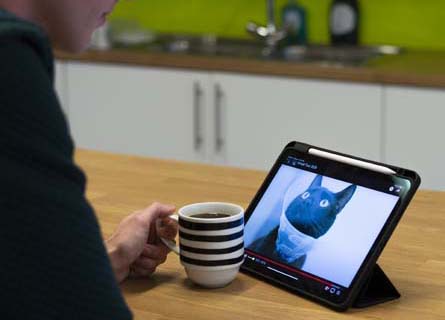 The Covid-19 outbreak caused huge disruption to political engagement, and planned events and MP visits to our centres had to be cancelled or postponed indefinitely. Adapting to this, we hosted a virtual event attended by 17 Parliamentarians including MPs from both sides of the House, Peers, Members of the Scottish Parliament, Northern Ireland Assembly, London Assembly Members and councillors. This event, which received positive feedback from attendees, was the first to feature a specially created 360-degree virtual behind the scenes tour of Battersea’s London centre alongside a Q&A on the operational and organisational impact of Covid-19 at Battersea and in the wider sector.

Support For
The Rescue Sector

We are one in a network of hundreds of dog and cat rescue organisations, large and small, across the UK, and in 2020 we continued to support our sector colleagues.

Across the year we worked with national media outlets to talk about the impact of Covid-19 on the rescue sector, at a time when few others were doing so. Media coverage included a Reuters package used across Mail Online, Telegraph Online, Yahoo and the Daily Telegraph, and a feature on the BBC News website.

In July, we took the proactive decision to draft a joint briefing for the EFRA Committee on the impact of Covid-19. All major sector organisations added their names to strengthen our position. We pitched the idea of the Committee holding a short inquiry, which was supported.

We set out to better understand the impact of the pandemic on the sector so we could draft guidance to MPs and set out the case for support. In December we published a new Battersea report to provide evidence of the impact of the pandemic on companion animals. The report makes a strong case for the Government to consider urgent financial support ahead of a potentially challenging period for smaller rescues. The report achieved 250 media mentions across national, broadcast, online and print media, with a total reach of 21 million. 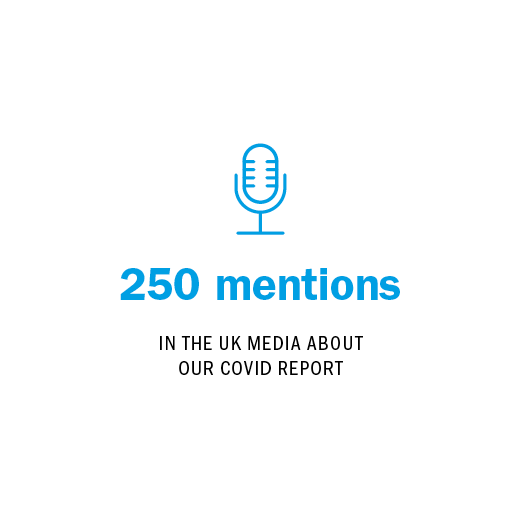 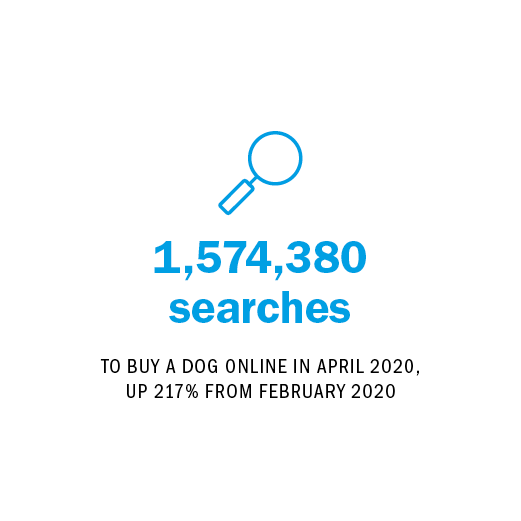 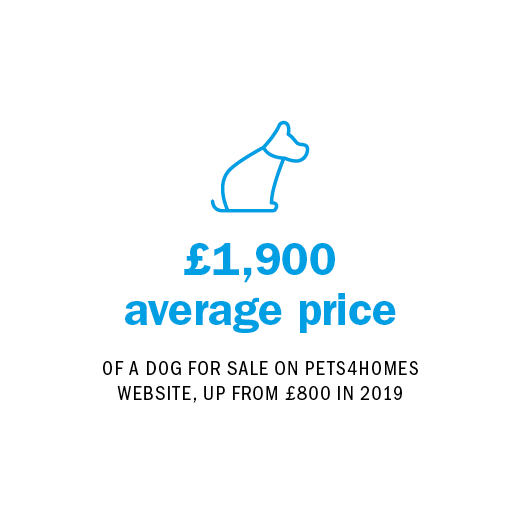 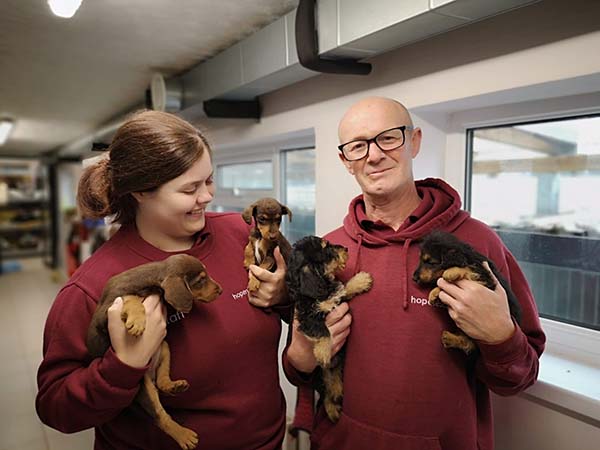 In an average year, Hope Rescue in South Wales would take in 900 or more dogs. In 2020, this reduced to 600. The rescue centre was already struggling after Storm Dennis left it needing major repair works, but once lockdown was announced, Hope Rescue lost major sources of income overnight, such as boarding kennel fees. The charity was able to apply for emergency funding from the Welsh Government, without which it says it would have potentially faced closure within the first three months of lockdown.

A recent survey by ADCH found that 36% of rescue organisations reported a drop in income of over 50%, compared to 47% in May 2020, with 13% reporting no impact on income. This suggests rescues are adapting either through fundraising in different ways or taking advantage of the ADCH and other grants. Ensuring our people, income, technology and systems support the effective delivery of this strategy, recognising their vital impact and contribution.