Back in November 2013 I was prescribed a dog as part of the treatment to help with my depression. She sold it well - exercise (in all weathers), getting out of the house, meeting nice people, having someone at home to welcome me back with unconditional love and having another living being dependent on me for their survival. 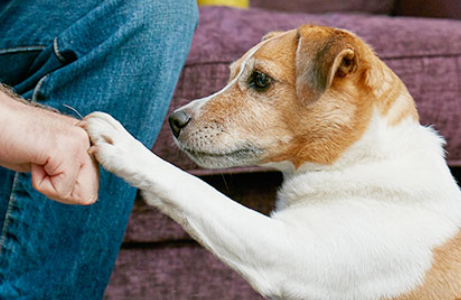 I gave it some thought and after speaking to my landlord, and getting his permission, I contacted Battersea and was registered as a prospective “doggy daddy”. Unfortunately, the voluntary work I was doing got more involved and I couldn’t follow through until August 2014 when I had my file re-activated. I came in a few times, and looked online regularly, but it seemed that every dog I chose had too many issues for a first-timer like me. I understood that, as it could have become frustrating for me and the doggy concerned, and the poor thing would have ended up back in care! My main concern was that I was the right human for the dog.

On a Sunday in mid-September, I received the call from Battersea to say that they had found me a match. A six and a half year old Jack Russell bitch called Leila who had been in foster rather than in the Home. She was due to have a medical and her teeth done on the Monday but I could see her after that. Timing was spot-on as I couldn’t get to Battersea until the Tuesday afternoon which gave Leila time to recover fully from the anaesthetic.

I arrived at 3pm and had a chat with the Rehoming Assistant who then went to fetch Leila and brought her into the room where I was waiting. She (Leila) did the usual doggy thing and ran around the room checking everything out. She came over to me…sniffed my hand and licked me and then ran around the room again. We were left alone for a while and I sat on the floor so I was less intimidating and she kept coming back to me and then going off for a run around again. I felt that we could work as she seemed relaxed and kept coming back and sniffing or licking my hand. When the Re-homer came back, I told her that it was a yes.

When I took her home, she trotted in as if she had lived here her whole life, explored for a bit and decided that her seat was on the sofa next to me!

The past four months have been interesting to say the least. We have walked every day for at least three hours in total. Leila has made lots of doggy friends who she enjoys running around off the lead and playing with and I have made some new friends too.

As an added bonus, I have lost 2 and a half stone and gone from a 42.5 inch waist down to a 35.6 and am still going down. I wish my psychiatrist had recommended this sooner as I can’t imagine my life without my canine companion.