In loving memory of Big Frank 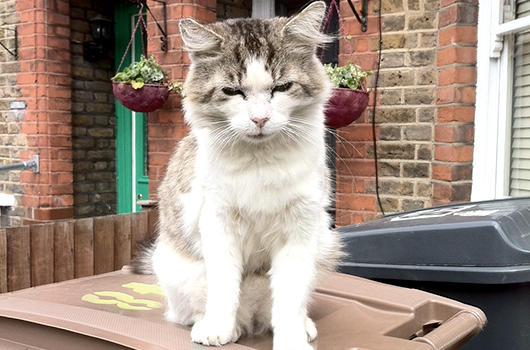 It has been about two years since Frank left, but it is only now that I feel able to write about him.

A retired bruiser of a cat, he was a huge furry tabby with two teeth remaining on one side of his mouth, large scars on his nose and chunks of flesh missing from both ears. Never a stickler for personal hygiene and far too big to sit on your lap, he would occasionally get into bed with you and stink up the Sunday morning lie in with a cacophony of silent-but-deadly feline farts.

But I loved him nonetheless and looked forward to seeing him perched patiently at the end of the road waiting for me to return home from work in order to trot alongside me eager for his dinner. Affectionately known as ‘Six Dinner Frank’ to the rest of my family, he had a number of safe houses dotted about the area that he knew he could get his food fix from. I’ll never know how many other families he visited, but I do know that after a visit to a house across the way with two pretty lady cats to keep him company, he would shamelessly return home for dinner already licking his chops from the first course!

As a larger than life boy he really did rule the roost; even the sunbathing fox on the top of the shed would cautiously step out of Frank’s way as he sauntered nonchalantly on by. His favourite pastime was to firmly park himself on the front garden bin and demand a cuddle and a scratch from every passer-by who’d give him the time of day. Never a very noisy cat he was still a bit of a show off, and would loudly announce his arrival to anyone who would listen to him in the nocturnal neighbourhood. It was only once the last of my household had gone to bed that you could hear Frank’s cat flap dutifully open and his authoritative yowl ring out across the moonlit back gardens.

Battersea had forewarned us that his dickie heart might be the cause of his eventual demise, but he died after being hit by a speeding driver outside my house and spent his final minutes being cradled by our neighbour who adored him. His death still remains very hard to talk about, but the mean streets of E17 will definitely never forget the inimitable Six Dinner Frank, and the neighbourhood is certainly a lot quieter without him. He will be sorely missed by his number one lady fan Madame, who still religiously turns up to sniff at his cat flap and check whether her beloved Frank is still there.

He was truly a one of a kind beast and remains incredibly missed, and even though a number of years have passed since his demise I am still not ready to fill that cat shaped hole in my life. A photograph of Big Frank now resides in my new living room, looking regal atop his favourite bin lid and scrupulously eyeballing every visitor with his battle scared wise old face.

However sad his sudden death was I know that Frank is currently stalking the clouds of feline heaven with a brand new set of pearly gnashers and enough left over curry and lady cats to keep him stocked up for eternity.