In loving memory of Charlie 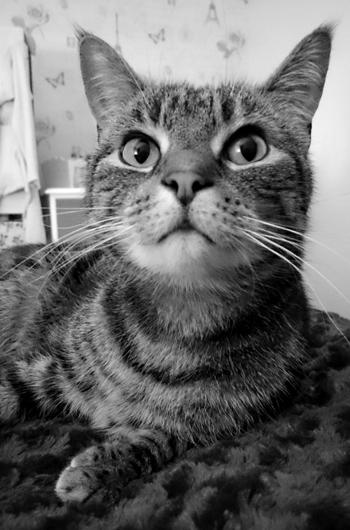 Charlie had such a placid nature.

He loved his cat nip toys or chasing my feet in bed. He didn't like the lazer mouse, no amount of bribery could get him to chase that little red dot. He loved his human friend Tia. They were inseparable. My daughter would dress him in her old baby clothes and he would just lie there and let her do it.

I'll always remember taking him to the vet for his castration and the vet saying that he will not grow any more now. Charlie not wanting to be called a liar grew and kept on growing. He was a big lad, he got the nick name "battle cruiser" just purely because of his size. He also had the biggest and most beautiful eyes. He was a stunning boy.

He also loved to pluck carpets with his claws. I tried everything, I even gave him his own bit of carpet to pluck but for some reason he loved mine.

The way he used to greet me when I came home from a long day at work or in the morning he would follow me to the toilet.

I moved house about 5 years ago and during the move Charlie vanished. I was distraught and refused to leave my old house till he was found. It turned out that Charlie had got spooked and gone upstairs to hide in one of the bedrooms. I was so relieved to find him.

He loved to go outside exploring, although he would never go far. I didn't let him out as much after he was diagnosed with inflammatory bowel disease. He still managed to escape at times and sometimes stayed out all night.

It's hard to remember everything, I'm sure I'll remember more in time.