In loving memory of Lilly 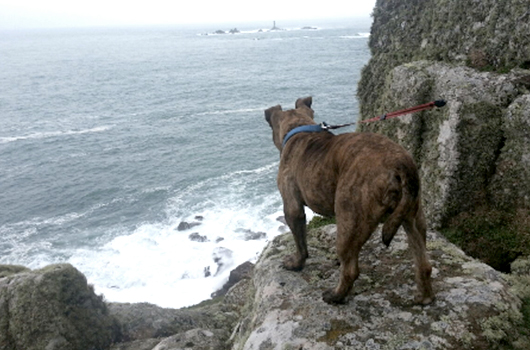 She travelled around England with us. Her favourite place must be on the cliffs of Cape Cornwall, staring out into the foaming crashing sea, most likely thinking: 'Why can't I just jump in like I do at Brighton Beach, and eat the waves?'.

We were told when we got her that she had had cancer cells removed. Subsequently, we removed two more unknown lumps by her belly. Then she had to have ligaments replaced in her right hind leg, had weakness in her back/blockage in the spine that caused knuckling and arthritis, and yet she carried on, eager to please us, and happy to see us coming home each time, trotting to the front door, or sitting on the top of her armchair by the front window, barking at anything that moved outside.

It was comforting to hear her snoring from two floors up. Yet she could show her temper. She would sometimes purposely throw the sofa cushions on the floor just to tell us she didn't like being left behind!

Last November, unusually she was breathing heavily, and our vet said her heart was racing, and sent us off to the cardio specialist. She had a tumour on her heart. On one of the later checks, a scan showed pericardial effusion (fluid around the heart). Poor darling dog. We chose surgery (fourth op) to cut the sac surrounding the heart to release the fluids. However, Lilly went into cardiac arrest and surgery was stopped. Three minutes of CPR and she was back, but the operation could not be completed and she would have to be periodically drained. She's certainly been through the wars.

Since then, she's been trying her hardest to stay with us, still going for little walks, but it was getting harder and harder, so we made a decision for the vet to come to our house on Tuesday to release her from all this. Even up to an hour before, Lilly was chomping on a humungous ham hock.

I'm glad she was happy, at home and surrounded by love. I am sure there will be other dogs, and more good times, but there's only one Lilly, she was a God-send and we miss her, more than we ever thought possible. Thank you Battersea for the privilege of being temporary custodians of our Mighty Lil! She brought us much happiness and laughter.

LOVED BY CHRIS AND AILEEN.