In loving memory of Mittens 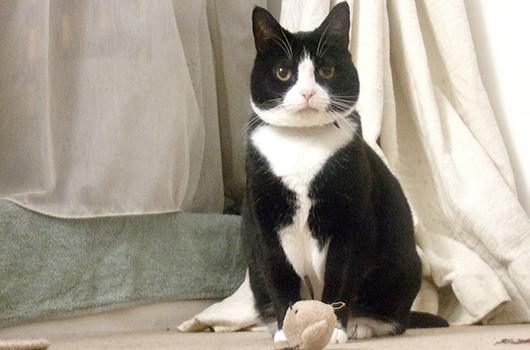 Yesterday at 5:45pm my cat Mittens was put to sleep. She was fifteen and a half, and arrived into my life aged eight via Battersea.

When her previous owners got a new canine member of the family, Mittens was so terrified she refused to go inside, so she was taken to Battersea, no doubt hoping the next move would be to her ‘Forever Home’. And indeed it was.

On meeting Mittens for the first time, many people would remark on how beautiful she was. Naturally I’m partial, but she had perfect ‘Tuxedo Cat’ markings and bore an uncanny resemblance to the cartoon cat on the Felix ads. Any intentions of changing her name melted away when I first saw that face and those four white paws. Mittens she was, and Mittens she would stay.

Her first few weeks were spent under the sofa, from which she would only venture forth for food or the litter tray. In those early days, in one rare lapse of toilet etiquette, she did a number two in her cosy and expensive ‘Igloo’ bed. It ended up in the bin.

Slowly, however, despite myriad feline quirks and foibles, Mittens came to emerge from under that rather soft and cuddly black and white shell. Late breakfasts were deemed unacceptable, and come morning, the timid little puss who I first clapped eyes on cowering in the corner of a Battersea cat pen would circle the bed yowling ever louder for the first meal of the day. Her snoring was equally cacophonous. Many a night I had to reach out and give her a shake, so deafening was her nocturnal snorting.

Over the past year or so Mittens began to show her age, even the step to the terrace posed a challenge for those shaky little legs. Sure enough, she was diagnosed with arthritis and diabetes. It was the latter that took her in the end.

One day in and I wish I could say I was coping better. Everything serves as a potent reminder of Mittens’ absence. Those chinks of golden sunlight begging to be slept in and the radio, once turned on each time I left her in the flat now remains off.

The £50 Mittens cost at Battersea was surely the best money I ever spent. I implore anyone considering a pet to take the rescue centre route, offering a good home to an abandoned animal which really needs it.

And so with huge sadness it’s goodbye to Mittens. Thanks for everything and sleep tight. I hope cat heaven comes complete with extra strong catnip mice, a plentiful supply of your favourite duck and garden vegetables food and, of course, earplugs for everyone else when you’re snoring.