In loving memory of Nofo 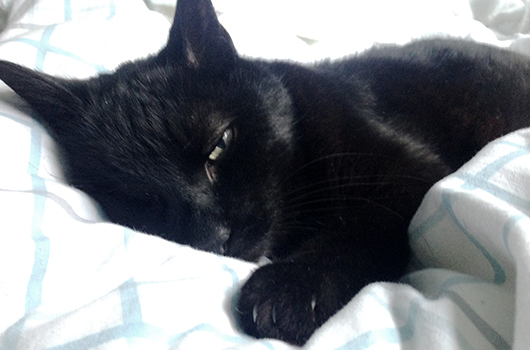 We are missing you so much Nofo.

In memory of Nofo, our first Battersea cat. Picked up in August 2001, became very sick, what seemed very quickly, in August 2015. We had to put you to sleep on Thursday 27 August as you were simply too ill to carry on.

Your name at Battersea was Nero, you were black and noisy, so very very noisy. So we changed your name to Nofo. Always chatty and communicative. Demanding and loving and adorable and annoying, especially the relentless, 2am, 3am, 4am to be honest any time past midnight wake up calls. What I'd give to have them back.

Your love of frubes will never be forgotten. It was only recently I couldn't turn my back on a bowl of coco pops laid out on the table for Milo to find you having jumped up and drinking the chocolate milk from the bowl. Fresh shrimps from the market were a favourite and you'd get so noisy when anything was being chopped up on the chopping board, expecting beef, or fish, and then disgust when shown it was tomatoes or veg.

You were a huge character, your won our hearts and now they are broken. Our little family has a big hole in it. It'll never be filled. You were a very special boy.