In loving memory of Rosie 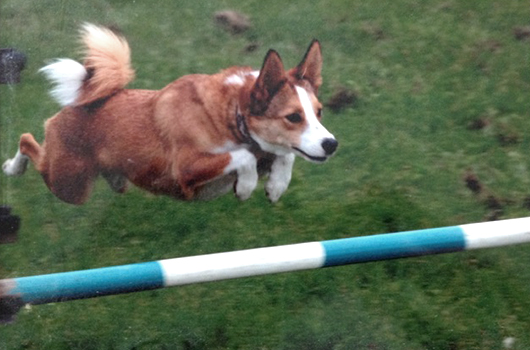 We collected Rosie from Battersea in September 1998.

We already had another Battersea dog, Molly, and they became fast friends. Rosie was a tiny pup and the estimate was that she was born beginning of August. At the age of 17, three weeks shy, Rosie passed away last week. We miss her tremendously, she was such a cracker of a little dog, very alert and never a problem. Rosie competed in agility and was part of the Battersea team at Crufts, her nickname was "the pocket rocket”. She was a very friendly, obedient and affectionate dog albeit very independent.

When Molly passed away we rehomed Beagle/Staffie Lolita from Battersea back in 2006 and Rosie and Lolita quickly bonded and have been friends ever since. Both have travelled extensively with us throughout Europe. I think they have been to most European countries and lately mostly to the beaches of Portugal, where we have a summer house. They have gladly jumped into the car with us, taking trains and ferries, but did not like the flying too much….and behaved impeccably.

Last year Lolita walked part of the Camino de Santiago in Spain with me and we had such fun. Rosie although still very active stayed at home. Up until mid May, when she had a bad seizure she was running 1km with me every morning. She had to be on a lead as she had become hard of hearing and her eyesight was impaired, but boy did she make me run!

Her last trip was in June when we returned to London from Portugal and we knew then that she was on borrowed time. It feels extremely empty without her, she was my best friend for 17 years, and Lolita misses her sister, so when the time is ripe we may come knocking on your door again.