In loving memory of Summer 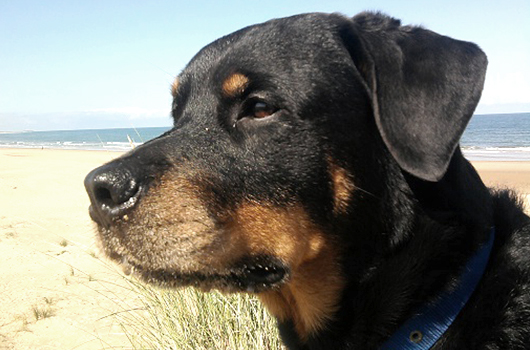 I met my beautiful rottweiler Summer when I was searching for a film star.

I had been a dog socialiser at Battersea's London centre for quite a while when I was asked to help someone make a short film at the Home. I needed a dog.

And there she was: gorgeous, leaping into the air, and with a note on her kennel door saying "Please don't stare at me". I thought, she'll never do. As I went into her kennel she gave me a huge greeting - and then slid down my leg and rolled onto her back to have her belly rubbed. This was love, and it was mutual.

Life for us all changed when my partner Graeme and I adopted her on 29 March 2014. She was nine, and the next day we gave her what we believe was her first ever sight and smell of the sea. She pawed it, bit it and tasted it. And you could see excitement written all over her huge smiling face as she stared at an horizon that had opened up her world.

And then there were the greetings. She would roar up the stairs to find me, career round the landing and into the bedroom, and not stop until she hit me. Once she knocked me backwards into a cupboard. The pair of us lay on the floor, me groaning and her waiting for her belly rub. Of course she got it.

Within a month we were off to what was to become her second home, the North Norfolk coast and the village of Blakeney. A first walk along the coastal path was a frenzy of excitement and discovery. But it was the thrill of spotting horses that sent her hurtling into a ditch, from which she had to be dragged out dripping black slime. She stood obligingly as she was hosed down in the garden of our pub B&B, with us hoping no-one would notice the still gooey footprints.

Gradually, with repeated visits, she calmed down, settling into the joys of mornings in a field with the smells of the sea beyond; breakfasts shared with us, other guests and their dogs; and walks beside the salt marshes from one village to another. And then there was her favourite place in the whole of her new world: the vast, mile-deep beach at Holkham, with endless sands to left and right, water-filled gullies to splash in and sand dunes to climb. Later outings would be more sober affairs and finally more sombre.

In March 2016 we took her for what proved to be her last visit to Holkham. She sat for a while away from us in the dunes, staring out to sea and at the horizon she loved.

The end came when she died gripped in my arms. In those last moments as she was put to sleep I had wanted to reassure her with the sound of my voice. Instead my face was pressed into the top of her broad head as I sobbed helplessly. She grumbled gently, but never once even wriggled. So why had I held her so tight? I think I just didn't want her to go.

In the 24 months and three weeks she was with us she went on 13 holidays to Norfolk and more than 80 weekend trips to Whitstable. She relished them all. She was a big girl with a big zest for life, a big smile, the biggest, sweetest soul, and was a total joy to have. And all of that leaves a big emptiness - but a big stock of happy memories too.