Even if your cat normally goes to the toilet outside without you needing to get too involved, it’s always a good idea to provide your cat with different options. A cat litter tray or litter box can potentially help prevent accidents and reduce the risk of stress in your cat, as well as bladder and bowel problems. What is a cat’s normal toilet behaviour?

The average cat will go to the toilet 3-5 times a day.

It is a natural instinct for cats to dig and bury when they go to the toilet, which usually starts at 7 weeks of age, although some cats will leave it exposed. Cats typically squat to urinate and adopt a slightly raised squat to defecate. If you notice your cat doing something different to this it may be a sign that something is wrong, so it’s best to check with your vet.

Most cats prefer to go to the toilet in secluded or private locations at the edge of their ‘core territory’ (i.e. the area where they eat, sleep and play).

What is a Litter Tray?

A litter tray is a term used to describe a receptacle or container with a loose granular material known as cat litter inside, that cats will use as a toilet. It can also be described as a “litter box”.

Cats generally don’t need to be trained to use a litter tray, as their natural instincts are to go to the toilet in a material where they can dig and bury. This behaviour tends to occur naturally when they are tiny kittens and, if a litter tray is nearby, they will instinctively use it.

Do I need to have a Litter Tray indoors if my cat goes outside?

Even if your cat normally goes to the toilet outdoors it is still a good idea to provide them with an indoor litter tray just in case (e.g. for emergencies). When the weather is very cold or wet your cat may not want to go outside, or there may be a cat in the vicinity that prevents your cat from feeling safe enough to go to the toilet outside, so providing a litter tray will ensure they always have an option.

What type of Litter Tray should I use?

Every cat is an individual with their own likes and dislikes, but most cats prefer to use a litter tray that is easy to get into and large enough for them to turn around in with ease.

The majority of litter trays are plastic and rectangular but there is a wide variety available, from simple cardboard disposable litter trays to elaborate, automatic devices.

Automatic, self-cleaning litter trays are a popular idea for many owners, but the motor noises and vibrations caused by the self-cleaning process can be disturbing for cats and may even deter them from using it.

Should Litter Trays be open or have a lid/cover on them for privacy? 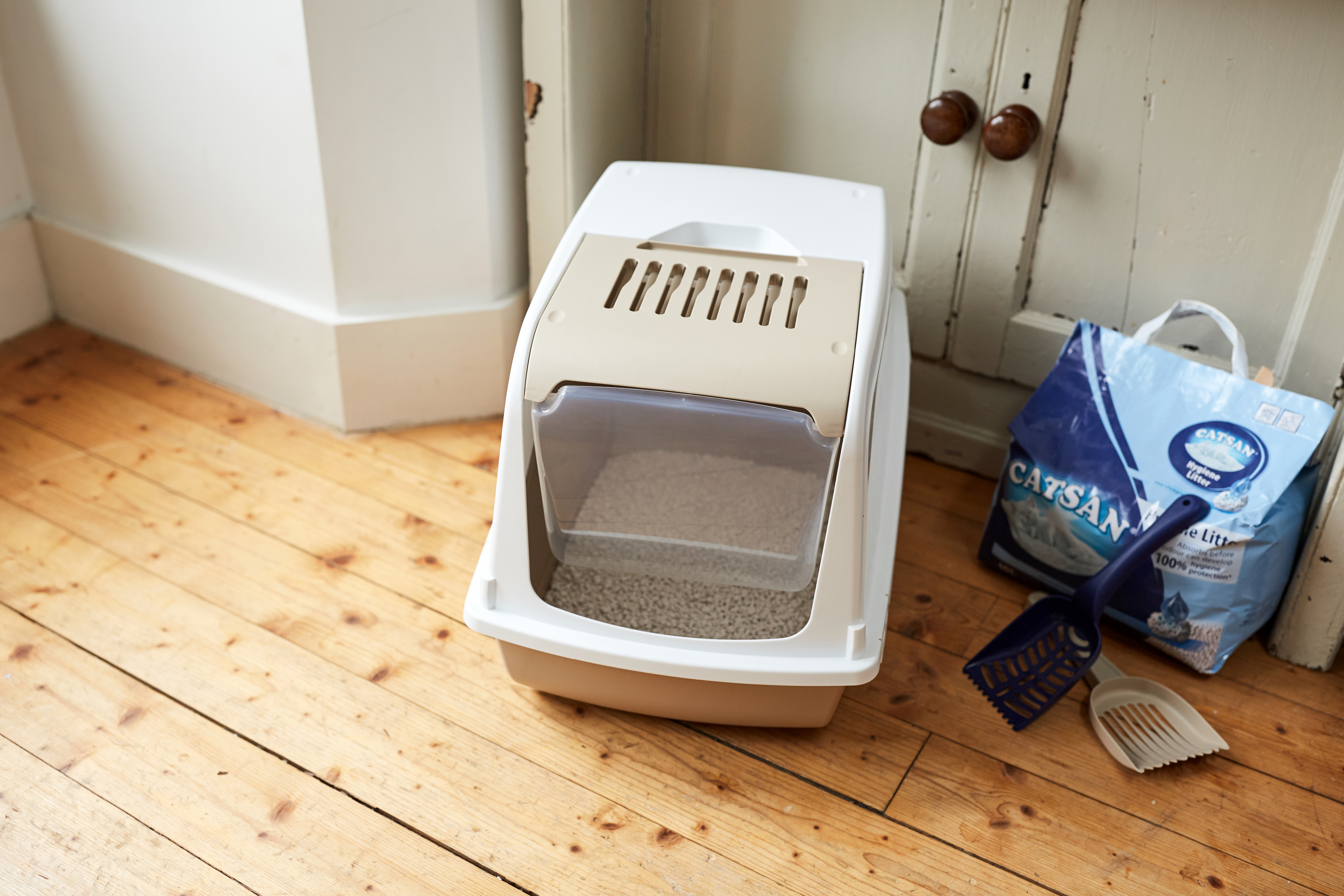 Covered litter trays are popular with owners, as the contents remain largely out of sight and many people assume they are preferable for cats too as they provide a discreet and private space.

In fact, many cats like to feel they can see all around them when going to the toilet.

Most cats will adapt to a covered tray but there are some who feel vulnerable confined in a small space with only one exit point. In multi-cat households open trays tend to be preferable as any cat using one cannot be ambushed by another that has been hiding out of sight.

How big should a Litter Tray be?

Most vets recommend that the ideal litter tray size is ‘one and a half times the length of your cat, from their nose to the base of their tail’. This gives your cat opportunity to move around, dig and cover without feeling restricted.

Due to the increased popularity of giant breeds, such as the Maine Coon, some cats may need a plastic storage container or a garden tray to give them the dimensions they need.

If you are providing a kitten with a litter tray, you should start with a much smaller version but increase it regularly as they grow.

What cat litter should I use?

Cat litter products can be made out of paper, wood, silica, corn, wheat and Fuller’s earth, but most cats tend to prefer non-scented litter that most resembles sand. Sand-like litters tend to be quite heavy to carry but other lighter biodegradable products are also available. Cats will develop a preference for a certain type of cat litter from a young age, so it’s best to stick to what they are used to as much as possible.

Should I choose clumping or non-clumping cat litter?

Cat litter comes in either clumping or non-clumping varieties. As the name suggests, clumping litter clumps together when your cat goes to the toilet on it. This makes it easy to scoop out small parts of the litter as necessary. Non-clumping litter simply absorbs urine, which means you will need to change the whole litter tray at regular intervals. Whichever you choose, if the tray starts to smell you may need to change the type of litter you use or clean the litter tray more regularly.

How much litter should I put in the litter tray?

Most vets recommend a depth of 3-4cm of cat litter in a litter tray, but your cat may have a different preference, so it’s best to keep an eye out to make sure your cat is happy. Some cats prefer the litter to be as deep as possible, although in an uncovered tray this can lead to lots of litter ending up outside the tray due to digging and burying. If you find your cat is going to the toilet more than normal for medical reasons, you will need to adapt the amount of litter you use to accommodate this.

How often do you clean a cat litter tray?

Clumping litters should be scooped at least twice a day to remove any lumps. Non-clumping litter should be changed every day or so as necessary. The entire contents of the litter tray should be replaced once a week, at which point you should wash the litter tray with hot water and mild detergent. Compound disinfectants, such as Phenol and Chloroxylenol, are toxic to cats so should not be used. Your vet may recommend a particular antibacterial cleaning product for medical reasons.

Should I line my cat’s litter tray?

Some people recommend using polythene tray liners or newspaper to line the bottom of the litter tray to make it easier to clean out. In reality these tend to leak as they are prone to puncture marks and tears. Cats can also get their claws caught in the polythene while attempting to dig and bury which is not a pleasant feeling for them.

How many litter trays should I provide?

When cats go to the toilet outdoors they generally prefer separate locations for peeing and defecation. So, if you wanted to create the ideal alternative indoors you would provide two trays for one cat, located in different areas.

When there is more than one cat in the house the general rule is that the perfect number is “one per cat plus an additional one extra”.

For example, in a household with four cats there would be five litter trays in various locations. If, however, the cats within the home are all very social with each other they may be comfortable sharing.

Where to put a cats litter tray(s)?

Placement is really important in making your cat feel safe. Litter trays should be placed in discreet corners or adjacent to walls so that your cat has a full 180° view of approaching danger but is protected from behind.

Litter trays should be away from places where your cat eats and drinks and should not be in busy thoroughfares, like a landing or hallway, where they may be interrupted.

Other areas to avoid include those adjacent to full-length windows looking out over the garden, cat flaps, and external doors where the threat from strange cats outside may be particularly evident for your cat.

I have an elderly cat, should I use a different type of litter tray?

If you have an elderly cat then, irrespective of their habits up to now, an indoor litter tray will probably be a requirement for their comfort in the future.

If your cat has stiff joints then it is a good idea to place a larger litter tray with a low entrance in an area that is easy for them to access.

I have a kitten, should I use a different type of litter tray?

Your kitten will be very tiny at first so a relatively small size litter tray with low sides to start with is ideal. However, they will grow quickly so for the first year or so of their life you will need to replace the litter tray with a bigger version regularly.

Kittens can be very exploratory when they are small, and they do have a tendency to put random objects in their mouths. Some kittens will show an interest in cat litter for this reason, so it is important for you to keep an eye on them in the early stages and, if they are prone to doing this, it’s a good idea to use a cat litter that is plant-based and won’t harm them if they ingest it. You can change to a more convenient cat litter if you need to once they are older. How to toilet train a dog How to protect your cats against the chill this winter 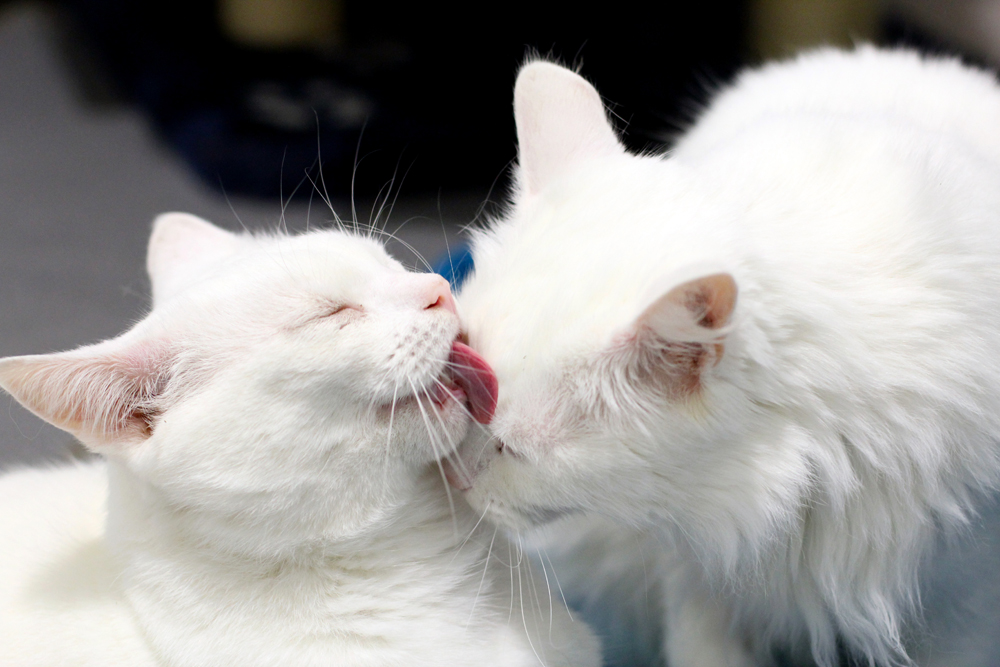 How to groom your cat