Introducing your cat to kids

Cats and kids can get a lot from one another as long as time is taken to ensure they are comfortable together. Read our five tips on how to introduce your cat to children. Getting a cat, or kitten, is very exciting, but when you bring your new cat home it's important not to force your cat and children together. Rushing introductions between your cat and children could make the cat nervous of being around children and may even make your children scared or resentful of the cat. Instead, gradually introduce them over a week or two once your cat has been given as much time as they need in order to fully settle. Your new cat should first be left to settle in a room that they can have to themselves, and includes everything they need, like their food, water, scratching post, toys, litter tray, etc. as well as places to hide. Once they’re settled, you should give your cat the chance to explore the rest of the house a few times when it is quiet, and your children are not around. Once they’ve had this opportunity, you can start to introduce your cat and children.

Once your cat has had time to acclimatise, is settled, and has had chance to explore the house without the children present, ask the children to sit down calmly and quietly in a room the cat is familiar with, but which isn’t their settling room. Make sure that once your cat is in the room that they are able to get away quickly and safely if they want. If it helps, place any young children in a play pen or behind a child safety gate with a quiet toy, book or screen to keep them occupied. Once the children are settled, let the cat into the room and ask the children to ignore them. The cat might approach and sniff the children but let any interactions (if there are any) be instigated by the cat. As tempting as it might be, encourage your child not to touch the cat initially. Have cat treats handy to tempt your cat a bit closer to your child, or to move them away. Be ready to pick the child up if he or she becomes over excited or tries to grab towards the cat.

Step 2: Build up the amount of time spent together

Gradually build up the amount of time your cat and children spend together over the first few weeks and give it plenty of time before you allow them to touch the cat. Allow your cat to approach and sniff your child if it wants to (and if both the child and the cat seem comfortable) but discourage your child from touching the cat unless the cat instigates it. Playing with cat toys is fine but try not to let your child get too excited or noisy. If they do, stop the introduction session and give the cat some space. First impressions count for a lot, so try not to rush these stages.

Step 3: Wait for the cat to approach first

As a general rule, you should teach children to only touch a cat if the cat approaches them first. Children should never pursue, pester or pick up a cat for attention as the cat will quickly learn to avoid them. It’s important the cat is able to calmly get used to the children at their own pace, without being overwhelmed, and for the children to learn that they should not automatically expect to touch the cat whenever it is nearby. The same rule also applies to adults so make sure you’re leading by example! 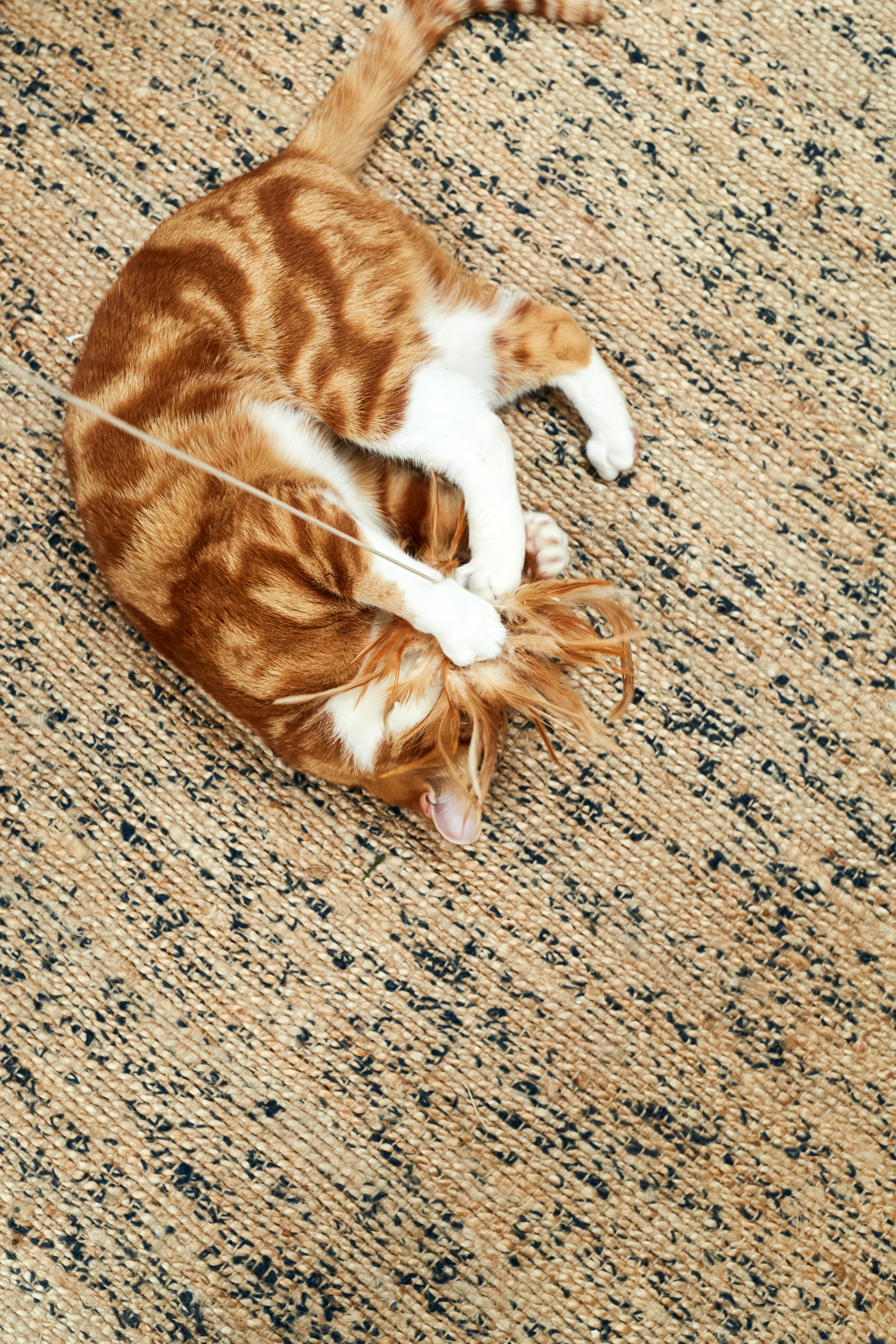 Step 4: Teach your children how to interact with the cat

Depending on the age of the child, you can start to teach them how and where it’s OK to touch the cat. Lots of adults don’t know this either, so it might be useful to learn alongside them. It’s a good idea to supervise the cat and child when they’re together, especially in these early stages, but don’t pick the cat up to force these interactions. Encourage children to mainly touch the cat around its chin, cheeks and in between its ears, and to avoid touching the cat’s tail and tummy (even though these areas may be particularly enticing!). It’s also a good idea to help your child spot the signs that the cat is enjoying the interaction, and more importantly when it has had enough or is feeling uncomfortable. This is very useful from a safety point of view as your child will be much less likely to be bitten or scratched if they know where it’s OK to touch the cat and also when to stop.

It’s also a great idea to encourage your child to spend time with the cat in other ways that don’t involve direct handling, such as playing with cat toys, or even doing some basic cat training. Wand toys and toys on strings will give your children chance to play with the cat but will also allow the cat to keep its distance and get used to being around their new family while having fun and burning off some energy. Making sure the cat has access to at least one area which is child-free, either using baby gates, or creating spaces up high where they can also access things like food and water will also help them to enjoy interactions and settle more quickly.

Download the advice on this page as a handy advice sheet and to use as a reminder: What type of cat is best to live with young children? Introducing your new cat to your resident cat

Spare a minute to sign up and receive Battersea emails so that you can get all the latest tips and tricks from our animal experts.