The Battersea Academy is an international centre of excellence in animal welfare. Its aim is to educate and empower rescue and rehoming organisations from small volunteer run shelters to established animal rescues, to do the best for dogs and cats with the resources they have. In 2019, 204 delegates from 74 organisations attended a series of week-long intensive and shorter programmes. As well as those from across the UK and Republic of Ireland, delegates attended from a further 17 countries, including Cyprus, India, Italy, Romania and South Africa. Many have already put their learnings into practice, by introducing new intake processes, hygiene protocols and assessment methods.

In July, the Academy hosted its most internationally diverse programme to date, with delegates from Malawi, South Africa, Romania, India, Sri Lanka, Cyprus and Portugal attending our flagship Intensive Rescue and Rehoming Programme. The week was a fantastic success, with delegate feedback of 100% satisfaction for customer service and 95% for facilitation and content. One organisation that has benefited from the Battersea Academy is Cheltenham Animal Shelter, a charity that has been helping animals since 1926.

After attending the one-week intensive programme, delegates from Cheltenham Animal Shelter returned to work ready to implement their new learnings and make a positive difference. As a priority, the charity introduced shelter metrics and trained others within their organisation on the topic. This included recording key metrics (occupancy, length of stay and departure) with the aim of reducing occupancy within their kennels.

By putting the strategies they had learnt into place, occupancy was reduced by 60% (60 dogs down to 25–35), which resulted in the average length of stay going from 62 days to 32 days. It also improved the level of care they are able to provide their dogs. For example, increased daily walking time from 10–15 minutes to 45–60 minutes, reduced noise levels, staff reporting less stress and more time for valuable staff training. Cheltenham Animal Shelter’s learnings from the Academy programme have also resulted in improved stress management for the animals in their care, improved assessment and intake processes, and a new rehoming process. All of which are changes that it says would not have been possible without participation in the Battersea Academy. Nicky Spanswick, Operations Manager at Cheltenham Animal Shelter, says: “We would relive the Academy tomorrow if we could as it was so inspiring and a fantastic week.”

Battersea was chosen as the first animal welfare charity to feature in the Government’s GREAT campaign, its most ambitious international promotional campaign to showcase the best of our nation and inspire people to visit, do business, invest and study in the UK.

The work of the Animal Partnerships team remained extremely important in 2019, and throughout the year we continued to work with other rescues across the UK to pool resources and help more animals. We took in 385 dogs and 181 cats from other animal rescues across the UK in 2019, totalling 566 animals and equivalent to 10% of our total intake. Animal Partners, including specialist breed rescues, also received some animals from Battersea (predominantly dogs), on occasions when their move to a new location was considered likely to speed up their rehoming. Layla was brought into Battersea when her previous owners were unable to keep her anymore. She had experienced a turbulent start in life, but her owners did the sensible thing by bringing her into our care when they could no longer provide a stable home. When she arrived at Battersea, Layla was extremely cautious of people and other dogs but her boundless energy meant she caught the attention of Battersea’s Working Dogs Manager, Jeff Moore.

Jeff worked tirelessly on a training programme for Layla, geared towards unlocking her potential as a working dog. However, she was still unable to get on around other dogs and struggled with life at Battersea, so all efforts were put into finding a suitable outlet for her. Thames Valley Police were contacted and Layla was taken along to their premises for an assessment. Luckily, after all the dedication and hard work Jeff had put into her training, she passed her initial tests with flying colours and stayed with Thames Valley Police from that moment on, to continue her training and begin her new life as a police dog.

The very next day, Battersea received a video update of Layla playing with a group of puppies also in training to be police dogs. It seemed Layla had finally found her place in the world.

Battersea is committed to helping more dogs and cats by supporting rescue and rehoming organisations to do more with the often limited resources they have available. In 2019 we awarded 34 grants through our Grant Giving programme, which runs alongside the Battersea Academy, totalling £261,000. Of these, 29 went to UK rescues and five to international organisations. Thirteen went to support organisations committed to making changes to improve their work, based on their learnings from the Academy. Successful grant recipients are required to monitor the impact of the funding on the animals in their care.

The largest grant was £15,000, the smallest was £500, with an average of £7,663. They funded equipment, refurbishment, the purchase of animal ambulances, and staff, including vets and behaviourists. 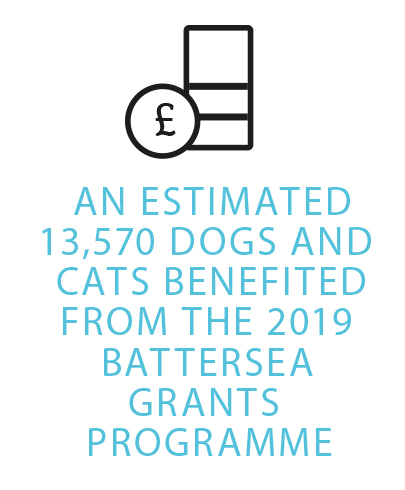 Ensuring our people, income, technology and systems can continue making their vital impact and contribution